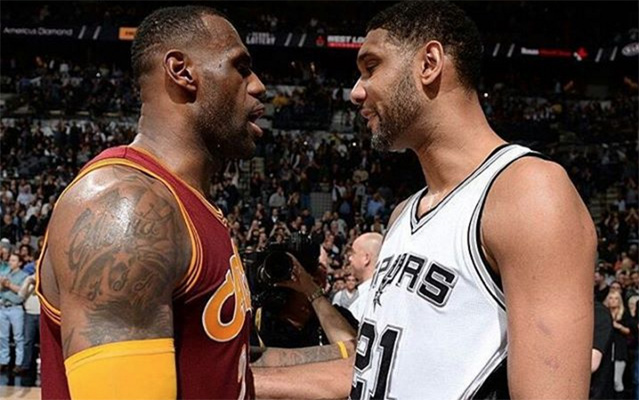 After battling in a closely-fought matchup on Thursday night, the Cleveland Cavaliers’ LeBron James took to Instagram to state that the San Antonio Spurs’ Tim Duncan was the greatest power forward in NBA history.

James acknowledged Duncan’s ability to remain consistent on the court and considered himself honored to be playing against him. James also noted that because Duncan is nearing retirement, the number of chances to battle each other in the future will be limited.

Don't know how many times we got left to go against one another but I've never have and I never will take them for granted! The consistency you've shown over the years goes unmatched and as a competitor it's always a treat to be competing on the same floor as you! Being a professional(professionalism) is so overlooked in our sport but I always knew who I could look to if I ever wasn't professional about this lovely game and that's You. From one King to Another and to the Greatest PF to Ever play this game, all Love and Respect Timmy D!

The two players have faced off against each other in the NBA Finals on three occasions, including the Cavs’ and James’ first-ever trip to the finals in 2007. In that matchup, the battle-tested Spurs beat Cleveland in four straight games. During his four-year stint in Miami, James’ Heat team won in 2013 before Duncan’s San Antonio squad got revenge the following year. In addition, the two have battled each other over the past 13 regular seasons.

Thursday night’s contest between San Antonio and Cleveland was seen by some as a potential preview of this year’s NBA Finals, given the current status of both teams. That heightened sense of importance manifested itself during the game when James’ elbow into Duncan’s chest caused the latter to take a brief timeout.

On January 30, the two teams will meet again in Cleveland. Given Duncan’s uncertain status for next season, that contest could mark the final regular season appearance between the two players.