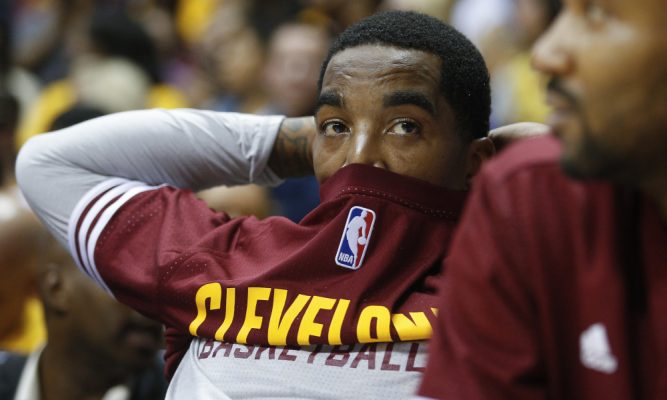 If his latest social media comment is any indication, Cleveland Cavaliers shooting guard J.R. Smith is getting frustrated with his status on the team.

He made that clear in the wake of the team’s third straight loss of the season, a stretch in which he’s only played a total of four minutes.

Showing off the sneakers that he was hoping to wear during the team’s home opener, which ended in an embarrassing 133-111 loss to the previously winless Atlanta Hawks, Smith instead was held out of the contest.

That led to some criticism from one Instagram follower about why he didn’t play, which Smith responded to by simply stating, “Ask the organization.”

Attempting to make a strong comeback after two subpar seasons, the 33-year-old Smith had struggled with injuries during the preseason. After battling a hip problem earlier in training camp, the 15-year veteran then developed issues with his right elbow that kept him out of the team’s season-opening loss in Toronto.

Last Friday night, Smith saw his first action of the 2018-19 campaign, playing just four minutes in Minnesota and missing his one three-point attempt on the night.

Even before his recent injuries, Smith’s status with the Cavaliers was something of a question mark. Some media reports stated that he was likely to have his playing time reduced, given that the Cavs are now in a rebuilding mode, with talks of being dealt elsewhere also prominent. In the latter case, a lack of interest from other teams, likely due to an unwillingness to take on his $14.72 million salary for the upcoming year, served as the chief reason why no deal was completed.

Smith is also scheduled to earn $15.68 million next year, the final year of the four-year contract he signed with the Cavaliers back in 2016. However, he reportedly is only guaranteed $3.87 million for the 2019-20 season, which would presumably make it easier for the Cavaliers to release him if his level of play doesn’t improve. Until he returns to the court, there’s no way to determine exactly if and when that takes place.