Report: Warriors Were Aware of LeBron’s Hand Injury After Game 1 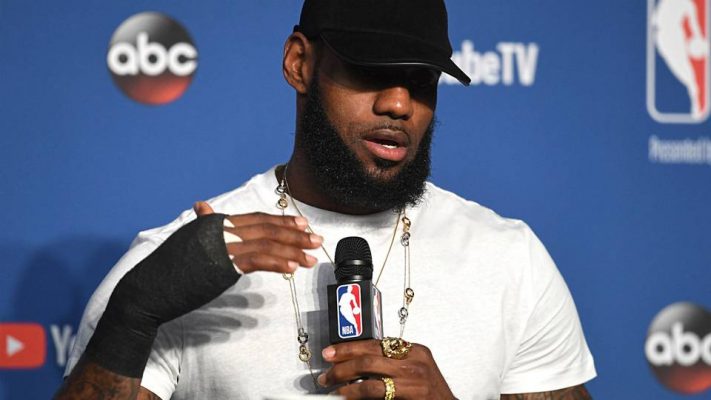 Until Cleveland Cavaliers forward LeBron James indicated to the media after Game 4 of the NBA Finals that he had injured his hand after the crushing loss in Game 1, the vast majority of people were unaware of any injury-related issue regarding James. However, one member of the media suggests that the Cavs’ opponents in the Finals, the Golden State Warriors, knew about what was described as a broken hand.

ESPN’s Stephen A. Smith criticized James for entering that postgame press conference with a cast on his hand, noting that it wasn’t present after any of the first three Cleveland losses in the series. Smith then made the claim that the Warriors knew of the injury, which was reportedly caused by James punching a whiteboard in the Cavaliers’ locker room after the bitter Game 1 overtime defeat:

The source of James’ anger was connected to two plays in the final minute of regulation of a game in which he scored 51 points. The first was a charging foul against Warriors forward Kevin Durant that was reversed to a blocking foul against James. The second was Cavs guard J.R. Smith forgetting the score in the final seconds, which prevented the Cavaliers from getting off a potential game-winning shot.

Of course, Stephen A. Smith’s forte is offering up controversial remarks that are delivered in bombastic fashion. While he claims that the injury was common knowledge among members of the media and the Warriors, he never presented such information during the series.

James isn’t likely to address this claim in the weeks ahead. That’s because he’s more focused on his status for next year, with his pending free agency next month of more immediate concern.