Video: LeBron James and His Son Show Off Secret Handshake After His Game-Winner 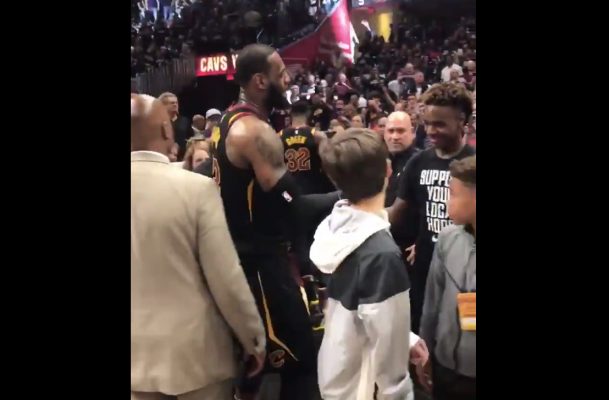 LeBron James was once again the center of attention for the Cleveland Cavaliers at Quicken Loans Arena immediately after connecting on the game-winning shot in the closing seconds of Saturday night’s Game 3 clash against the Toronto Raptors. After being swarmed by teammates after hitting the shot, James found time to offer an enthusiastic handshake to his son, LeBron James Jr.

James’ son has already gotten plenty of attention from recruiters for his basketball prowess, even though he remains a few years away from competing at either the collegiate or professional level. During the past few years, James has spent a good portion of his offseasons watching his son compete in AAU competition. Given James’ ability to stay healthy and produce at an MVP-level, the prospect exists of James potentially playing with his son.