Don't Miss
Home / Media / LeBron on Kevin Love Wanting to Play 4: ‘We Have to Listen to What Kev Needs’

LeBron on Kevin Love Wanting to Play 4: ‘We Have to Listen to What Kev Needs’ 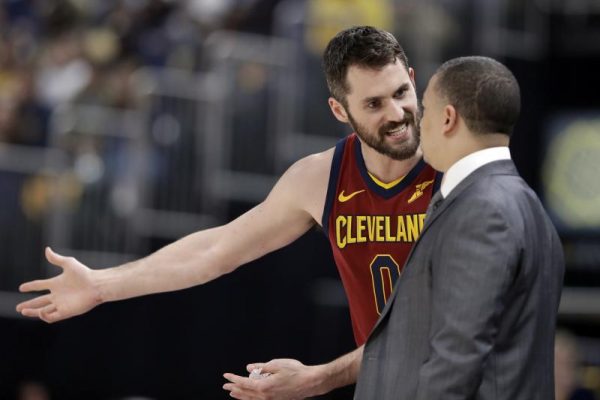 The playoff struggles of the Cleveland Cavaliers‘ Kevin Love this postseason have largely focused on his problems when it comes to shooting from the field and his efforts in trying to defend against opposing centers. His teammate, LeBron James, feels that keeping Love at center is sufficient enough to help the team for now, though he also indicates that the demands of the position on Love have to also be taken into consideration.

James spoke to media on Thursday morning during the team’s shootaround in Toronto and discussed Cleveland head coach Tyronn Lue‘s plans to continue to start Love at center instead of power forward and have Tristan Thompson keep coming off the bench:

“Obviously it’s a fine line,” James said. “We’ve been very successful with Kev at the 5, but we have to listen to what Kev needs as well. If there’s times throughout the postseason or a game where he’s feeling a little worn down because he’s battling with a lot bigs, then we’ve got to make the substitution properly. I think Coach Lue has done that, obviously with the start of Game 7, being able to start Double T at the 5 and allow Kev to play his natural position. We’re going to do what’s best for the team, but also we also want to do what’s best for our All-Star as well. I think the coaching staff has done a great job of that.”

In Tuesday night’s Game 1, Love had problems handling Toronto Raptors center Jonas Valanciunas, with Thompson later taking over to effectively neutralize Valanciunas in the fourth quarter. That situation came in the aftermath of Thompson’s strong Game 7 performance on Sunday that helped the Cavaliers dispatch the Indiana Pacers.

A Cavaliers win in Game 2 on Thursday night would put the team in prime position to potentially sweep the series, with the next two contests set for Cleveland. Tipoff on Thursday night is at the unusual time of just after 6 p.m. ET.