Video: Jordan Clarkson Vows to Find His Way in These Playoffs 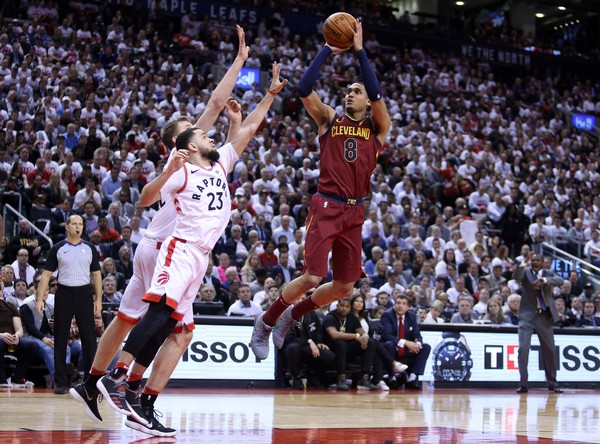 The Cleveland Cavaliers secured a big overtime win in Game 1 of their series against the Toronto Raptors. While several players stepped up in the contest, one member of the Cavs roster has yet to make much of an impact in the playoffs as of yet.

Through the first eight games of the playoffs, Jordan Clarkson is averaging just 4.5 points on 31 percent shooting. On Tuesday night, Clarkson finished with five points on 2-of-7 shooting from the field.

Despite his lackluster performances thus far, Clarkson is confident that he will find his way and manage to make his mark as the Cavs look to advance toward a fourth straight NBA Finals appearance.

“My stuff is kind of in spurts,” Clarkson said on Wednesday. “I’m in there a couple minutes, come in, come out, just got to find a rhythm to be honest with you. Scoring-wise, I feel like shots will fall. But other than that, I’m just trying to impact the game any other way I can, if that’s rebounding, try to pressure the ball, just try to get in the game mentally that way more than just kind of scoring and doing what I regularly do.”

He later added that nerves may have accounted for his lack of production earlier in the playoffs. Still, he remains confident that he will return to form soon.

“I won’t lie to you I was a little bit, especially in the first game, playing a little fast,” he said when asked if he was nervous. “I wouldn’t call it nervous, it was just a thing that I kind of had to break in and get my feet wet a little bit, but I’m going to find my way.”

During the regular season, Clarkson averaged 13.9 points per game on 45 percent shooting. If he can return to that form soon, the Cavs will undoubtedly benefit from having yet another scoring threat at their disposal.