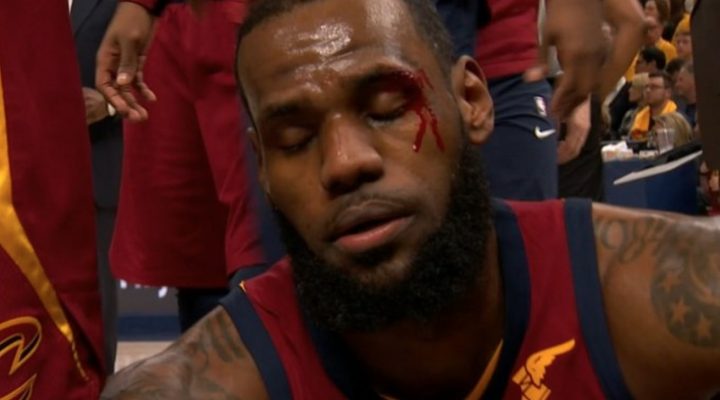 The Cleveland Cavaliers are having their fair share of struggles during the first half of their Game 6 matchup against the Indiana Pacers, trailing 57-47 at the break and taking some tough hits along the way. One of the players who actually needed medical attention was LeBron James, who was dealt an elbow to the face from Indiana’s Myles Turner during a drive to the hoop with 1:15 left in the second quarter.

LeBron bleeding from a hit in the face. pic.twitter.com/xixu2AuYZq

The elbow that connected with James resulted in a bandage being placed just above his left eye. That was the second instance of the night where the Pacers attempted to neutralize him. The first came on a foul just 25 seconds into the contest. In that instance, James was grabbed around the neck by Bojan Bogdanovic and converted both free throws to give the Cavs an early 2-0 advantage.

A second-half comeback by the Cavaliers is needed to avoid taking the back-and-forth series to a Game 7, which would be played at Quicken Loans Arena on Sunday.