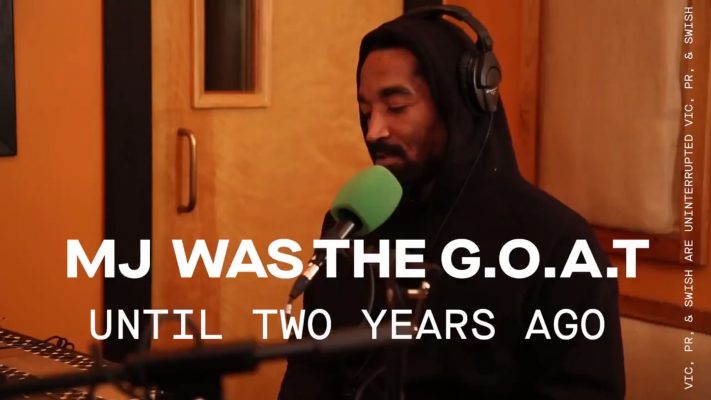 As LeBron James continues his incredible NBA career, the conversation regarding his place among the league’s best of all time continues as well. Some claim the only thing standing in the way of his place atop the throne is more rings. Others claim that regardless of what he accomplishes, he will never be better than Michael Jordan.

According to James’ Cleveland Cavaliers teammate J.R. Smith, the four-time MVP already cemented himself as the greatest of all time two years ago.

On Friday, Smith told UNINTERRUPTED precisely why he believes James should be considered the best ever.

"Michael was the greatest of all time, in my opinion…up until two years ago."@TheRealJRSmith keeps it real about MJ vs. @KingJames in a wide-ranging interview with @TeamVic and @pr_RWTW.

“M.J. (Jordan) was the greatest of all time, in my opinion, up until two years ago,” Smith said before focusing on James’ accolades. “The last couple years, at 33 years old, averaging a triple-double a whole month walking into the playoffs. Just hit 31,000 points the other day. Hit 30,000 points earlier this year, 8,000 rebounds, 8,000 assists.

Smith continued by questioning what it will take for people to admit James is better than Jordan “whether it’s numbers or just ability.” Given the way he framed the question, it seems Smith believes some are afraid to admit that James may have actually surpassed Jordan already.

There is no doubt that Jordan is perhaps the most impactful basketball player to ever put on an NBA jersey. Regardless of the heroics James manages to produce on the court, that may never change. That does not change just how impressive James’ 2017-18 season was, however, and how miraculous his entire career has been.

In the end, the main argument Jordan supporters continue to make is that he has six NBA championships to James’ three. This season, James proved that he has a whole lot left in the tank, and it seems there is still quite a bit of time for him to eclipse Jordan’s ring count.

James will begin his pursuit to inch closer to Jordan’s ring count this Sunday, when the Cavs host the Indiana Pacers in Game 1 of the first round of the 2018 NBA Playoffs.