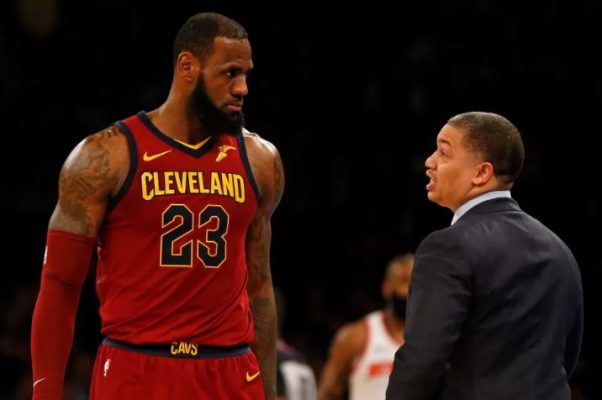 The biggest concern in many people’s minds when talking about the Cleveland Cavaliers is their defense or lack thereof. Their chances at winning the championship this season are highly dependent on how well they can stop the other team from scoring the basketball and they haven’t been able to do so at a respectable pace for much of the year.

But in an interview with Cavaliers coach Tyronn Lue as reported by Cleveland.com’s Joe Vardon, it appears that they have plans to address that glaring weakness in their game.

When asked about the adjustments that the Cavs are planning to make once the postseason arrives next week, Lue was confident that they will be able to implement something new.

“It will be totally different next week. We’ll probably do things we haven’t done all season when it comes to the playoffs, things we’ve been working on all year,” Lue said. “It’s the same thing we do every playoffs. So, we’ll see what happens.”

Heading into their season finale versus the New York Knicks, the Cavs were ranked 29th in defensive rating with 109.5, the second lowest in the league. If not for their fourth-ranked offense, the Cavs wouldn’t be anywhere near the playoffs this year.

However, Cleveland has improved its defense since the new players arrived in the trade deadline deals on Feb. 8. From that time up to the Knicks game Monday night, the Cavs have ranked 21st in the league with a 108.8 rating, which is still bad but at least not bottom of the barrel. It’s an improvement that needs to continue if the Cavs want to win another championship in June.

According to Vardon, they have been saving particular defensive schemes specifically for the postseason since LeBron James returned to Cleveland in 2014. The formula must be working to an extent as the Cavs have reached the NBA Finals three consecutive years, winning the Larry O’Brien Trophy once during that span.

“I think we had a team that the last three years, before this year, we had pretty much in place, so we knew when the playoffs started, things we wanted to do, things we worked on all season, we knew we were capable of doing,” Lue said. “But we gotta see, with the new guys, what they’re able to do, so it’s been tough trying to balance the two.”