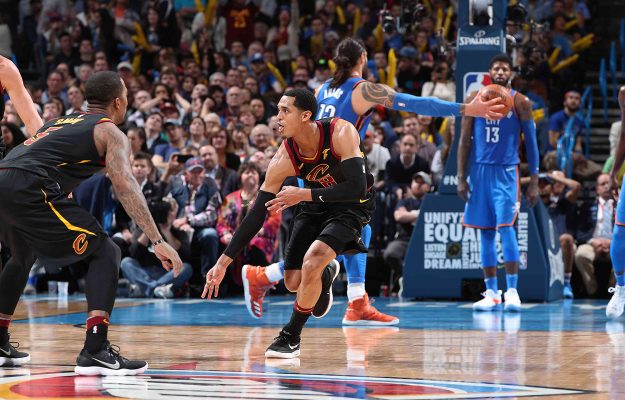 If offered the opportunity to choose, most NBA players would prefer to start, rather than come off the bench. The combination of a higher profile and likely a much higher salary serve as key reasons, yet Cleveland Cavaliers point guard Jordan Clarkson seems very happy in his role as a key man off the bench.

Clarkson was acquired from the Los Angeles Lakers on Feb. 8 along with Larry Nance Jr., with the Cavaliers sending Isaiah Thomas and Channing Frye to the Lakers in return. Upon his arrival, Clarkson found himself once again in a reserve role in Cleveland, with veteran George Hill taking over the starting point guard slot.

Clarkson’s flexibility about the situation and his confidence in being able to inject some life into the team’s offense have made the adjustment period a smooth one that’s paying dividends for the team, according to Matthew Florjancic of WKYC.com.

“I’m real comfortable,” Clarkson said. “I just come in there, play free and try to change the game with energy, playmaking and scoring. That’s the way I try to impact the game. I’m comfortable doing it with the second unit, so it’s just been a good thing for me.”

The ability of Clarkson to get things going quickly offensively has been in evidence over the past two months, most recently last Friday in the team’s comeback win over New Orleans. In that game, he scored 23 points, which included four 3-pointers, and has scored in double figures in four of the last five games.

“It’s always kind of been my thing,” Clarkson said of scoring in bunches. “That’s why I continue to shoot the shots, have confidence because I know once I see one go in, I got a good feeling the next one’s going in, the next one after that.”

During his 23 games in a Cleveland uniform, Clarkson has averaged 13.6 points, 2.3 rebounds, 1.8 assists and 0.7 steals. His overall shooting from the field has seen him connect at a rate of 47.3 percent, with his attempts on 3-pointers connecting 40.8 percent of the time.

Clarkson’s abilities have been noted by the team’s assistant coach Larry Drew, who likes the potential offensive jolt that the guard provides:

“You can’t expect to play well or get off to great starts every night, but you do have somebody on that bench that when things get a little shaky for you, you can throw them in there and you know that they have that ability,” Drew said. “Whether they’re able to get it done, that’s another thing, but it’s nice to have a guy like that. When other guys are struggling, you can throw a guy in a game like that, and that’s who Jordan is. He was really good for us.”

One of Clarkson’s teammates, Kevin Love, likes the lack of ego that he brings to the court in relation to playing time:

Clarkson’s motivation in delivering for the Cavaliers is likely due in part to the opportunity he has to help the team capture its second title in the past three years. As a member of the Lakers, such thinking was a waste of time.