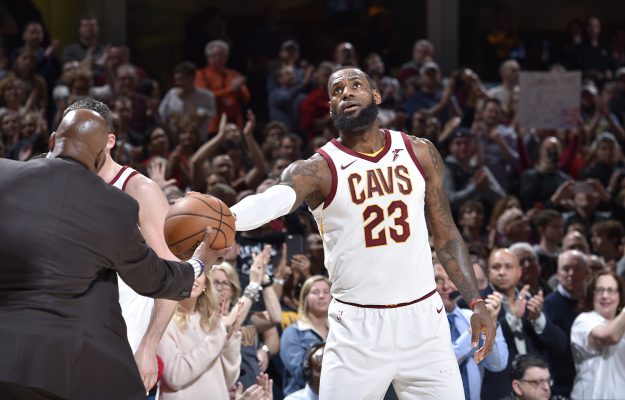 (Cleveland, OH) — On a record-setting night, Cleveland Cavaliers forward LeBron James came within one rebound of a triple-double and scored eight points in the final four minutes to lead the Cavs to a 107-102 victory over the New Orleans Pelicans at Quicken Loans Arena on Friday night.

In that fourth quarter, New Orleans had led 85-82, only to watch Cleveland unleash a 13-3 run to hold a 95-88 advantage with 6:12 left. After the Pelicans chopped the margin to three points at 99-96, James scored the final six of his points to make it a 105-98 game in favor of the Cavs. Still, the Pelicans made one final push, missing an opportunity to tie the game in the final minute, with one free throw each from Jordan Clarkson and J.R. Smith providing the final cushion.

“Just trying to close out the game,” James said about his clutch effort. “This is a playoff team and it was good to get a win. especially the way we started.”

James did pick up a double-double with 27 points and 11 assists, while also grabbing nine rebounds. His record for most consecutive games scoring in double figures didn’t take much time to accomplish as he delivered a dunk with 5:59 left in the first period, which led to a rousing ovation from the home crowd. He surpassed the legendary Michael Jordan and extended his streak to 867 games, with James accepting the ball that scored the record-setting points during a brief stoppage in play.

“It’ll probably go in my trophy case, but it really means a lot to me and my family,” James said. “I didn’t have much time to let it sink in.”

Clarkson was also a key performer for the Cavaliers as he scored 23 points on 9-of-13 from the field. The only other Cavs player to score in double-figures was Rodney Hood, who notched 16 on the night. On the glass, Tristan Thompson corralled 14 boards, with Kevin Love also hauling down eight despite a rough shooting night.

“He played really well and played like the Tristan of old,” Cavs assistant coach Larry Drew said of Thompson. “T.T. did a phenomenal job in the second half.”

The Cavaliers had hit 7-of-10 (70 percent) from the field to start the game, but cooled off considerably over the rest of the first quarter, connecting on just 5-of-13 (38 percent) in that area. That helped the Pelicans eat away at a pair of early eight-point leads, closing the period by outscoring the Cavs 20-12 and making it a 29-all deadlock.

That cold shooting continued in the second, with the Cavs making just 3-of-13 (23 percent) from the field, which allowed the Pelicans to go on a 19-6 run and take a 48-35 lead with 4:25 left in the half. Cleveland was able to briefly get the margin in single digits, but headed into halftime trailing 57-47.

Despite facing that 10-point deficit, the Cavaliers continued to struggle in the first six minutes after the break. Their problems were then magnified when point guard George Hill suffered an apparent ankle injury with 6:22 left in the third after he stepped on a player’s foot during a drive to the basket. Hill had to be helped to the Cavaliers locker room.

“It was really unfortunate that he sustained the injury he did,” Drew said. “At that point, I made the decision to go with Jose [Calderon]. I was actually thinking of making the switch at halftime because I thought we needed high-energy guys.”

However, the injury seemed to spark the Cavs, who closed out the quarter on a 21-8 run, which included a 10-2 surge in the final three minutes of the quarter. Keys to the comeback were the fluid ball movement that resulted in eight assists for the period and, more importantly, no turnovers. Entering the final 12 minutes, the Cavaliers had regained the lead at 80-79.

The changing role for Calderon that’s seen his playing time fluctuate all season was the subject of a postgame question about how he’s able to stay focused:

“I think it’s just a mental thing,” Calderon said. “I have to be ready and I know what I have to do.”

“You need one or two guys like that on a team,” James said. “Guys with zero ego. When G. Hill went down, he answered the call.”

Clarkson was asked about the Cavaliers’ resiliency in coming back after the Hill injury:

“We just keep pushing,” Clarkson said. “We can’t put our hands down.”

The Cavaliers return to action on Sunday night when they host the Dallas Mavericks in a game that will tip off shortly after 6 p.m. ET.