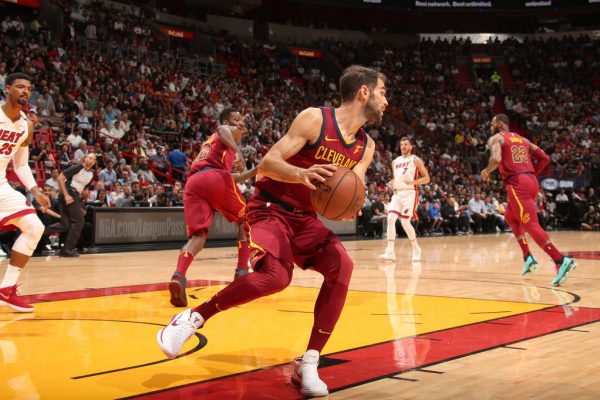 (Miami, FL) — Being on the receiving end of a 24-5 first-half run helped put a crushing end to the five-game winning streak of the Cleveland Cavaliers, as they fell 98-79 to the Miami Heat at American Airlines Arena on Tuesday night.

The Cleveland point total marked a season-low for the team and was the byproduct of poor shooting from the field and on 3-pointers. The Cavaliers hit just 37 percent (31-of-85) overall and a terrible 15 percent (4-of-26) from long-range, with the fact that the Cavs managed just 15 assists and committed 14 turnovers also indicative of their disappointing performance.

“The system we’ve been trying to put in, we’ve been doing it on the fly,” LeBron James said. “The communication has to be there.”

James led Cleveland with 18 points, while adding seven assists and six rebounds. The only other Cavs players to score in double figures were Rodney Hood with 15 and the duo of Jordan Clarkson and Jose Calderon, who each ended their nights with 11 points. On the rebounding front, Tristan Thompson grabbed 13 rebounds, while Larry Nance Jr. cleaned the glass for 10.

“I struggled in the first half, but was aggressive in the second,” Hood said. “I feel some big games coming.”

Signs were evident almost immediately that it wouldn’t be the Cavs’ night, since after just 82 seconds of action, Kevin Love left the game after getting elbowed in the face. By the time he returned to start the second period, the Heat had taken control of the game by scoring eight unanswered points and closed the first quarter on a 10-2 run, giving them a 29-18 advantage.

“When he went out and came back, he wasn’t feeling it,” James said about Love. “We missed his production, but also, our rotation was in disarray and our rhythm was broken from the beginning.”

“We missed shots early and allowed their pressure to take us out of what we wanted to do,” Cavaliers assistant coach Larry Drew said after the game.

Things got even worse during the second quarter when the Cavaliers connected on just 23 percent (5-of-22) of their attempts from the field. Cleveland missed their first 10 shots in the period and took nearly seven minutes before connecting on their first field goal, with five more turnovers also adding to their misery.

“They put a lot of pressure on us, they were flying around,” Hood said. “We couldn’t get anything going.”

Those woes turned a hole into a canyon with regard to the Cavs’ deficit and sent them into intermission trailing 54-34. Love played six minutes in that second quarter, but was then ruled out of further action at halftime, ending his night with a mere point and rebound.

After the break, the Cavaliers improved their shooting from the field to 50 percent (10-of-20) in the third quarter. That helped them chip the margin down to 13, with a chance to get closer, but by the time the period had ended, they trailed by 16 at 75-59.

During the first five minutes of the final quarter, Cleveland cut the margin to 11 at 80-69, but then watched Miami run off seven straight points to spark a 14-4 surge that put the game to bed.

“We gotta start getting ready for Charlotte,” James said. “We’ll watch some film and see what we did wrong.”

The Cavaliers won’t have long to wait until taking the court again as they travel to face the Hornets on Wednesday night in a game that will tip off shortly after 7 p.m. ET.