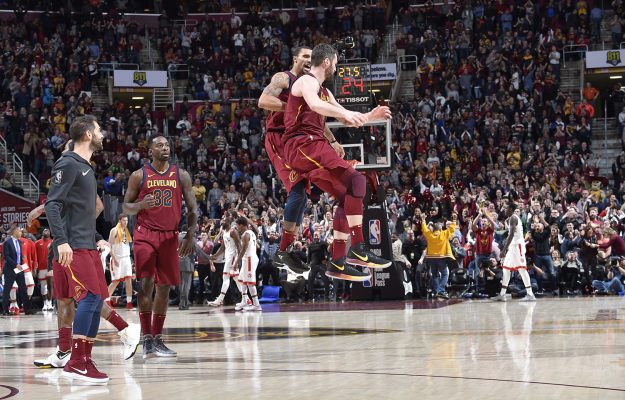 The Cavaliers had trailed 112-107 with just over seven minutes left when they began that 16-6 surge which gave them a 123-118 advantage with 2:51 remaining. They maintained that lead for the rest of the contest, but it was Kevin Love‘s 3-pointer from the right corner with 27.5 seconds left off an assist from James that served as the biggest score down the stretch and made it a 128-124 game.

“Just reading the defense, once I knew they had their eye on me, I saw Kev and that’s money,” James said.

In that second half, the Raptors scored 50 points after scorching the net for 79 in the first half. Their shooting percentage from the field also took a major dive, going from 63 percent (32-of-51) to 42 percent (15-of-36), with their touch on 3-pointers also materially affected. In that department, they went from 12-of-18 (67 percent) in the first two quarters to just 3-of-16 (19 percent) in the latter two.

“We came out in the second half and started playing with more energy,” Cavs assistant coach Larry Drew said. “Clearly, it was our defense that sparked us.”

James and Love each ended the night with double-doubles, with James scoring a game-high 35 points and handing out 17 assists. He also snagged seven rebounds and committed no turnovers, while Love scored 23 and grabbed 12 boards.

“We went in the locker room at halftime and made some adjustments,” James said. “I think it started with our aggressiveness. That allowed us to get back in the game.”

Each of the other three starters for the shorthanded Cavs also reached double figures in points: George Hill scored 22 on 10-of-11 from the field, Jeff Green added 15 and Jose Calderon contributed 14. J.R. Smith came off the bench to deliver 10 points to the Cleveland cause.

“We got some stops down the stretch,” Hill said immediately after the game. “Coach (Drew) kind of got on us at halftime, telling us we’re giving up too many points.”

Neither defense showed up until the last few minutes of the opening quarter, with the Cavaliers closing out the period with a 42-38 lead. Cleveland shot 77 percent from the field in the first after connecting on 14-of-16 to start the game, while Toronto started off by hitting 11-of-13 from the field before cooling off to finish 15-of-23 (65 percent) in that area.

The key stretch for the Cavs in that first quarter was a 14-4 run that allowed them to retake the lead. During the 12 minutes of action, the defensive-free nature of the contest had the two teams combining for 11 3-pointers and 24 assists.

The Cavaliers cooled off considerably in the second period, hitting for just 39 percent (7-of-18) from the field. Compounding that dip was the Raptors continued ease in putting the ball in the basket by connecting on 61 percent (17-of-28) from the field, including six more 3-pointers, which gave them a 79-64 halftime lead.

“It showed a lot of resiliency,” Love said of the Cavaliers’ comeback after trailing by 15 at the half. “More than anything, even when we’re down, we’re not out. This is big for our confidence, knowing that we’re never out of a game.”

Coming out of the break, the Cavs managed to put together a 9-2 run to nearly cut their 15-point halftime deficit in half. However, the Raptors answered with their own 9-2 push to take a 90-75 advantage with 6:32 left in the third. Over the rest of the period, the Cavaliers charged back with a 23-9 run to slice the margin to a single point at 99-98 when the quarter ended.

While 57 percent shooting (12-of-21) during the period aided the Cleveland cause, holding Toronto to just 26 percent (5-of-19) in that category served as a bigger boost to the comeback.

“There is one game during the season that changes your team,” Drew said. “I really believe that tonight’s game might have done that for us.”

The Cavaliers return to action on Friday night when they stay home to face the Phoenix Suns. Tipoff for that game will be shortly after 7:30 p.m. ET.