How the Emergence of George Hill Has Transformed the Cleveland Cavaliers 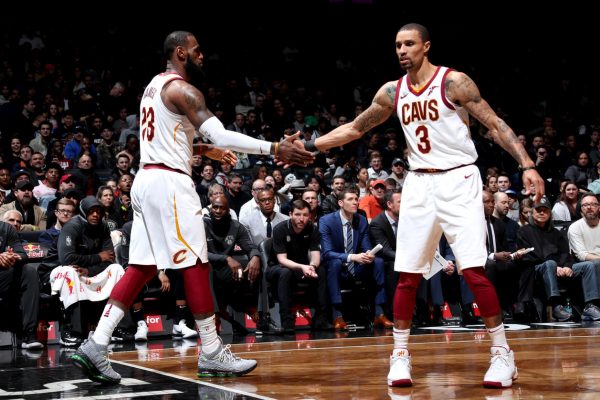 The Cleveland Cavaliers have won six of their last seven games after defeating the Charlotte Hornets 118-105 on Wednesday night. While his individual stats don’t show it, George Hill was a huge reason for the win.

Looking at his final numbers — nine points on 4-of-13 shooting, two rebounds and four assists — Hill doesn’t appear to have had much impact on the game. That is until you check the plus-minus stats where Hill had the highest on the entire team with a plus-29. Yes, that’s higher than LeBron James, who had a plus-21, despite scoring more points (41), grabbing more rebounds (10) and dishing more assists (8) than Hill.

And this isn’t just the first time during these last few games that Hill has had a better plus-minus than James. He has led the team in three of the past seven games, making Hill one of the biggest reasons why the Cavs are playing well lately.

Cleveland.com’s Chris Fedor articulated Hill’s value to the Cavaliers since he has come onboard:

“The Cavs praise Hill’s effectiveness running the pick-and-roll, something that becomes more apparent as he continues to get acclimated to this new offense. He rarely turns the ball over. The Cavs also recognize his 3-point ability, seeing the benefit from the open space created by James, Kevin Love and others. Hill didn’t always capitalize early, struggling to find the range. In March, Hill is shooting 46.9 percent from the field and 36.5 percent from beyond the arc.

“In 21 games with the Cavs overall, Hill is 18-of-38 (47.3 percent) on corner 3-pointers, often staying on the perimeter and being the beneficiary of James’ rim attacks.”

George’s defense was the primary reason the Cavs were able to contain Hornets’ All-Star point guard Kemba Walker in that recent Hornets victory. Though he scored 21 points, Walker shot a woeful 7-of-18 from the field including 2-of-8 from the three-point line, while one of those threes was made with Hill already on the bench and the game already decided.

That’s why, despite his poor shooting, interim coach Larry Drew let him play 35 minutes. Hill rewarded his coach’s trust when he hit a crucial three-pointer from the corner with 4:23 remaining as the Hornets were chipping into their lead. The Cavs put the game away soon after that.

As Fedor further pointed out, when Hill is on the floor, the Cavs’ defensive rating is at 98.0, but without him, it shoots up to an unforgivable 149.0. And it’s not just in this game, too. In the last seven games, with Hill on the floor, the Cavs have outscored their opponents by 88 points while having the best net rating at 20.3. Net rating measures the team’s point differential per 100 possessions while a player is on the court.

Drew praised Hill’s performance versus the Eastern Conference-leading Toronto Raptors a week ago:

“George is kind of that company guy that wants to do everything the right way, and I totally get that, but it gets to a point where we need him to be aggressive,” he said. “We need him to really look to get downhill on pick and rolls.”

Hill showed his aggressiveness throughout the game, scoring 22 points on 10-of-11 field-goal shooting to go along with four rebounds, one steal and two blocks.

If the Cavs are going to continue their winning ways, Hill’s aggressiveness both offensively and defensively will be key. He may not be one of the traditional point guards in the game, but any chance that the Cavaliers have at winning a championship will start with Hill manning the playmaker position.