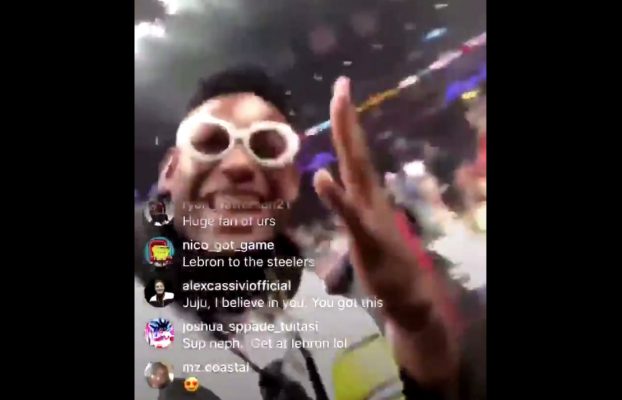 Plenty of celebrities are out to see the Cleveland Cavaliers, and more specifically, LeBron James, as the Cavs play two games at Staples Center this weekend. Though not in the entertainment field, Pittsburgh Steelers wide receiver JuJu Smith-Schuster still managed to get James’ attention during Friday night’s pregame before the Cavs’ contest against the Los Angeles Clippers.

Prior to entering Staples, Smith-Schuster indicated his far-fetched and tongue-in-cheek premise for attending the game.

I AM HERE AT THE STAPLES CENTER PERSONALLY RECRUITING LEBRON JAMES TO PLAY FOR THE PITTSBURGH STEELERS pic.twitter.com/ZdKMLIuTs2

Smith-Schuster will have one more chance to try to recruit James, with the Cavaliers set to take on the Los Angeles Lakers on Sunday night.