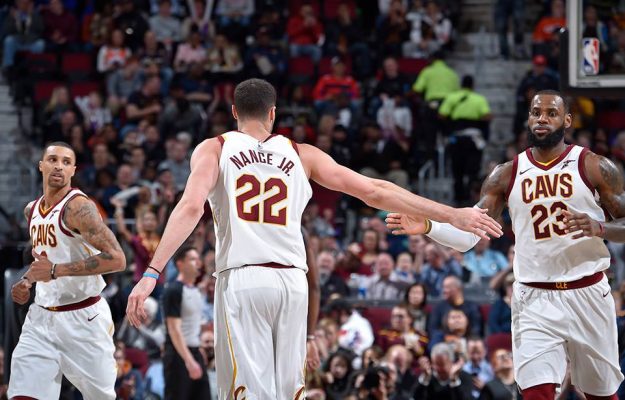 On a night when the Cleveland Cavaliers were short-handed in the frontcourt, Larry Nance Jr. stepped up and delivered a masterful performance against the Detroit Pistons. The first-time Cavs starter made the most of his opportunity, scoring 22 points and grabbing 15 rebounds in a 112-90 rout of their Central Division rival.

Among the most surprising weapons in his arsenal on display Monday night was a 15- to 17-foot jumper that was on target with regularity, keeping defenses from clogging the lane. Everyone was impressed, including Cavs team leader LeBron James.

LeBron James explains the positive impact Larry Nance's jumper can have for the @cavs' offense. pic.twitter.com/5tWufcXxDG

“It keeps the opposing 5-man honest,” James said. “That’s all. You can’t just sit in the lane and muck up everything but it just keeps them honest. Larry’s ability to make that 15-foot jump shot and he’s been working on his three as well so I told him to keep taking them if they gonna keep leaving him open. It helps. It just gives us a little more space.”

The 6-foot-10 center was everywhere on the floor, taking and making jumpers, rebounding, dunking, receiving alley-oop passes, and outhustling everyone in the Pistons lineup. By the time the game ended, Nance had his NBA career-best scoring and rebounding numbers in just 32 minutes of action.

Cavs coach Tyronn Lue was worried that the extra minutes would cause Nance to get into foul trouble. Instead, he accumulated only two fouls throughout his time on the floor.

Nance will be in the starting lineup, at least until Tristan Thompson returns from an ankle injury that has sidelined him for multiple games. Until that time, Cavs fans should expect Nance to add more athleticism and energy to the starting lineup.