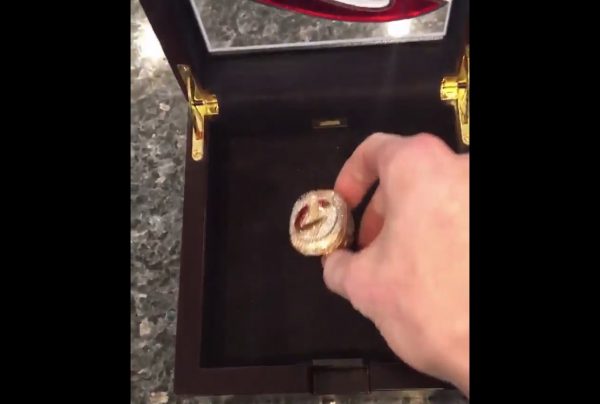 Kevin Love is still recovering from a fractured bone in his left hand, but it seems his Twitter fingers are fully healthy.

On Saturday, Barstool Sports posted a tweet regarding Love trying to fit in with the new additions to the Cleveland Cavaliers roster.

Kevin Love trying his best to fit in with the Cavs pic.twitter.com/BSB36O0f5P

The All-Star big man responded hours later, proving that no matter who he plays with, he’ll aways fit in in Cleveland.

Still trying my best to fit in??? Check out this Primo ?. Once again…jokes on you @barstoolsports pic.twitter.com/uZiMQaDDfu

Nothing says proving your haters wrong like reminding them that you’re a world champion. For now, Love will have to let the ring do the talking as he continues to rehab from the fracture he sustained back in late January. Once he does return to the court, he’ll have just a couple weeks to find his role on the new-look Cavs roster before the playoffs begin.

From there, the Cavs will look to beat the odds and bring yet another championship to Cleveland, and another ring to Love’s mantelpiece.