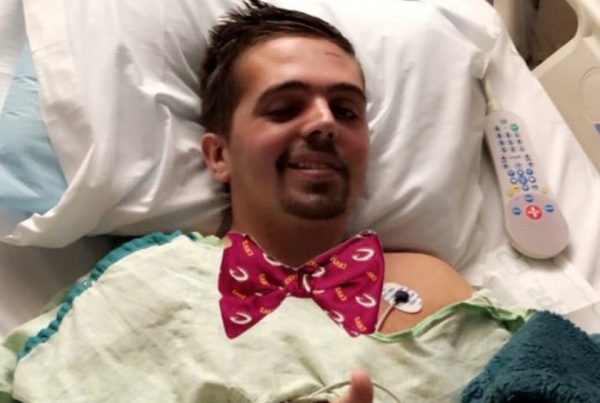 After his son went through eight hours of surgery, Dan Gilbert announced that Nick Gilbert is now in recovery. The Cleveland Cavaliers owner expressed his gratitude to those who supported them through this time.

Nick Gilbert appears to be in high spirits after the operation based on the photo. His first question suggests he’s been thinking about the Cavaliers’ recent game last Tuesday. The Cavs won that game versus the Oklahoma City Thunder 120-112.

According to ESPN, the young Gilbert’s surgery was performed at a Detroit-area hospital.

Basketball fans will remember Nick Gilbert from the time when he represented the Cavaliers during the 2011 NBA lottery. The franchise won the No. 1 pick that year and they used it to select former Cavs point guard Kyrie Irving.

Over the years Nick Gilbert has undergone successful brain surgery and chemotherapy after being diagnosed since birth with neurofibromatosis, a genetic nerve disorder that causes tumors to grow anywhere in a person’s nervous system.

As Dan Gilbert said in his tweet, his son still has hurdles to overcome after the surgery but hope is definitely alive.