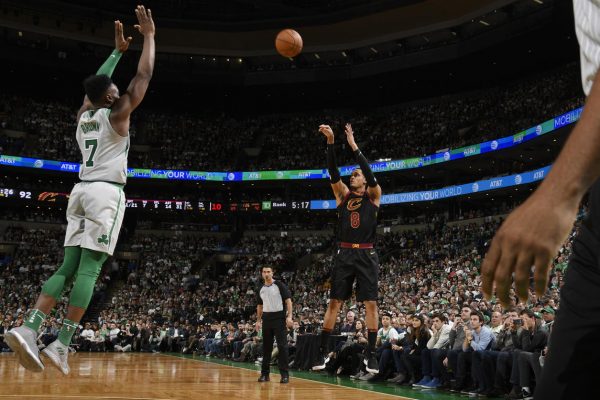 (Boston, MA) — Making a huge statement with dominating play over much of the final three quarters, the new-look Cleveland Cavaliers blew out the Boston Celtics by a score of 121-99 at TD Garden on Sunday afternoon. The contest marked the first game for the four players the Cavs acquired on Thursday.

“Attention to detail tonight was at an all-time high for the first time this season,” LeBron James said immediately after the game. “We got some players who can go out and get their own, that are pretty smart and  they picked it up like they’ve been here all year.”

During the second quarter, the Cavs closed the latter half of the period with a 19-8 run to take a 62-54 advantage into halftime. The keys to the surge were related to stopping the Celtics’ long-range shooting touch and forcing them into turnovers.

In the first quarter, Boston had connected on 4-of-9 when it came to 3-pointers and committed no turnovers. In contrast, the Celtics responded with eight consecutive misses from long-range and seven turnovers by the time intermission arrived.

The second period success for Cleveland was also fueled by the return of James, who had left the game with 5:04 left in the first after banging his knee in the midst of a charging call. At the time he left the game, he had just four points, but when he returned at the 8:58 mark of the second, he scored 13 points before the end of the quarter.

“I took a little hit physically, but I was able to bounce back,” James said.

After the two teams resumed play, the Cavaliers held a 73-62 advantage with 8:42 left in the third quarter. It was at that point that the Cavs settled the issue with a 22-7 run that gave them a commanding 95-69 lead. While Boston scored the final five points of the third, the Cavaliers pushed the lead to as many as 29 in the final period at 104-75.

Six different Cavaliers players finished scoring in double figures, led by James, who garnered a double-double with 24 points and 10 rebounds. James was able to sit out the entire fourth quarter due to the Cavs’ huge lead and likely would have had his third consecutive triple-double, since he had eight rebounds when he left the game.

The newcomers combined for 49 points, with Jordan Clarkson pacing the quartet with 17 points, Rodney Hood delivering 15 points and George Hill notching 12. Each of them grabbed three rebounds and they combined for eight 3-pointers, with Larry Nance Jr. having the quietest day with five points, four rebounds and three assists.

“I think the I.Q. and the passion they play with is going to help us a lot,” James said. “We’ve got some hungry guys.”

Prior to the game, Cavs head coach Tyronn Lue indicated his strategy about using the new players:

“Try to play those guys together, because they’ve got very small packages that they can run and just kind of go from there,” Lue said.

J.R. Smith had a torrid afternoon, finishing with 15 points on 6-of-7 from the field, including a trio of 3-pointers. Jeff Green rounded out the double-digit scorers with 10 points and three boards

Early on, the game had all the earmarks of being a nip-and-tuck affair, with the first quarter seeing eight lead changes and six ties. The Cavaliers offered a more aggressive approach throughout the quarter and finished the period trailing 32-31, though they shot 52 percent from the field.

“It’s gonna take some time, but this was an impressive win on the road and was a good start,” James said.

The Cavaliers will play their final game before the All-Star break on Tuesday night, when they travel to face the Oklahoma City Thunder in a game that will get underway just after 8 p.m. ET. Cleveland will look to gain a measure of revenge after being on the receiving end of a 148-124 thrashing by Oklahoma City at Quicken Loans Arena on Jan. 20.