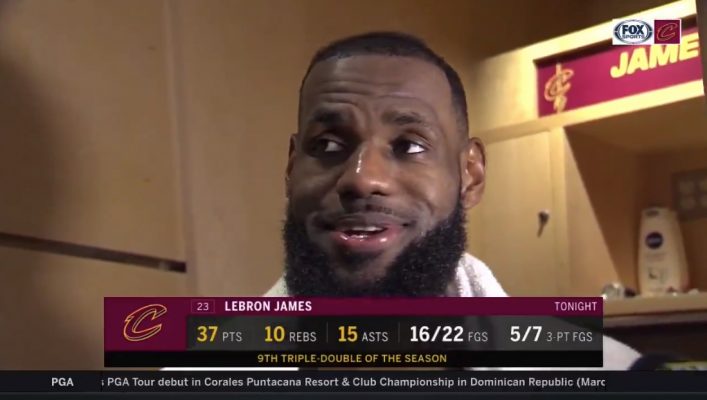 A thrill-packed 140-138 overtime victory for the Cleveland Cavaliers over the Minnesota Timberwolves on Wednesday night was capped in dramatic fashion by a LeBron James fadeaway jumper at the buzzer.

In his postgame comments, James offered an amusing reason why he was happy to see the ball go in the hoop. However, he also made sure to note the key contribution of his teammate Jeff Green, who threw the inbounds pass to him with just one second left on the clock in overtime. He also cited his head coach Tyronn Lue in designing the play.

The scenarios were similar, but LeBron's mind wasn't on his memorable game-winner for the @cavs against Orlando in the 2009 playoffs.

James’ basket had a sense of déjà vu for some, dating back to his 2009 buzzer-beater against the Orlando Magic in Game 2 of the Eastern Conference Finals. That shot was also made at Quicken Loans Arena and evened that series at one game apiece. Ultimately, the Cavaliers fell in six games.

The Cavaliers return to action on Friday night with a trip to face the Atlanta Hawks on the schedule.