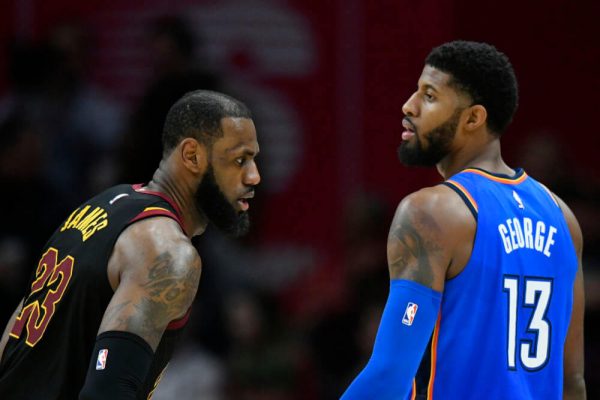 It’s beginning to look like LeBron James‘ days as a member of the Cleveland Cavaliers may be numbered. The Cavs have lost 12 of their past 18 games and discontent is growing throughout the organization. James would reportedly prefer to stay in Cleveland past this season, but that hasn’t stopped NBA insiders from discussing potential landing spots for James once he becomes a free agent this offseason.

On Monday, Sam Amick and Jeff Zillgitt of USA Today discussed the current drama in Cleveland and couldn’t help but discuss a possible scenario that would see James continue his career with the Los Angeles Lakers.

“Another trip to the Finals could always change the landscape, but all signs point to James leaving Cleveland,” Amick wrote. “So, barring his faith in [Dan] Gilbert being renewed in the next four months, where does he go? That part remains unclear.

“While we have chronicled the many reasons why the Houston Rockets are a viable possibility, the [Los Angeles] Lakers scenario remains front and center in the minds of many league executives. And even with (Paul] George saying recently that he’s happy in Oklahoma City, there is still a strong sense in some circles that he’ll jump at the chance to partner with James while playing for his hometown team in July.”

George almost ended up in Cleveland this offseason before a draft night trade was called off and recent reports indicated that James was upset by the fact that the Cavs were not able to trade for the All-Star forward. Given this information, it seems James would certainly consider signing with the Lakers if they were able to bring George along.

There is quite a lot of basketball to be played before any reports regarding James’ future can be taken completely seriously. Still, it seems the wheels are already turning in terms of teams trying to sign James this summer. If the Lakers were able to sign both George and James, they would quickly become the NBA’s newest superteam.