Report: Several Cavs Players Don’t Like or Trust Each Other 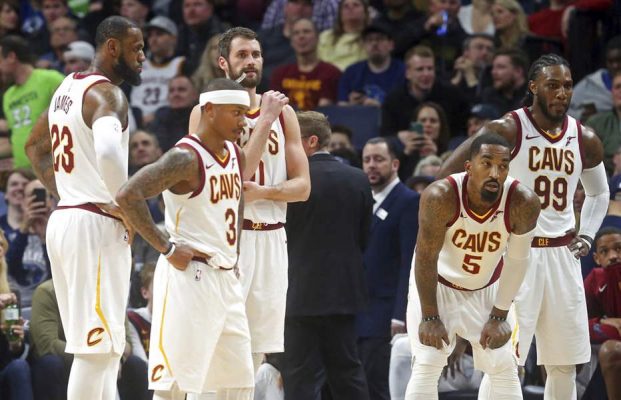 The bottom has fallen out from under the Cleveland Cavaliers as they continue to struggle both on and off the court. That fact was made painfully clear in Saturday’s matchup against the Houston Rockets when the Cavs lost in a 120-88 blowout.

Given the lack of success, it should be no surprise that trouble is brewing behind the scenes. According to ESPN’s Brian Windhorst, the discontent within Cleveland’s locker room has reached critical levels.

Windhorst continued to say that an adversarial relationship has begun to form between LeBron James and the front office as James refuses to commit to re-signing with the Cavs this offseason, and the front office fails to make deals to improve the roster prior to the NBA trade deadline.

Like most fans right now, Windhorst isn’t sure what the future holds for the Cavs. However, he does seem to think that the worst may still be yet to come.

“With the trade deadline coming up if the Cavs miss an opportunity to change this roster, they may regret it,” he warned. “LeBron James’ free agency is now rushing at them, just like the playoffs are as well.”

Losing James to free agency again would be a serious blow to the Cleveland faithful. Given the status of the Cavs right now, it’s hard to blame anyone for wanting a fresh start somewhere else.