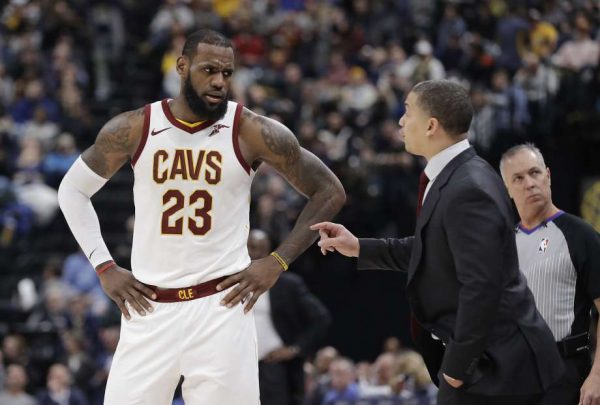 Following the Cleveland Cavaliers‘ 148-124 loss to the Oklahoma City Thunder on Saturday, the discussion of exactly how to fix the issues that have plagued the Cavaliers over the past month continued. While the job security of Cavs head coach Tyronn Lue doesn’t appear to be in question, LeBron James‘ postgame comments appeared to at least open the door to the start of speculation about that status.

#Cavs LeBron James on Ty Lue possibly fired: “I would hope not, but really don’t know. I don’t know what’s going to happen with our team. I have no idea what conversations have been going on. I’ve been trying to stay as laser-sharp as I can to keep my guys ready to go out & play"

Ironically, Monday marks the two-year anniversary of Lue’s elevation to head coach of the Cavaliers, which followed the dismissal of former head coach David Blatt. Lue would go on to lead the Cavs to their first-ever title five months later and was rewarded with a five-year contract worth an estimated $35 million following the championship run.

Given the amount of money that Lue would still be owed, it’s highly doubtful that Cavaliers owner Dan Gilbert would make such a move. However, the team remains mired in a funk that’s seen them drop five of the last six games and nine of their last 12.

Lue and the team face another problem in their next outing, which will take place Tuesday night in San Antonio against the perennially strong Spurs.