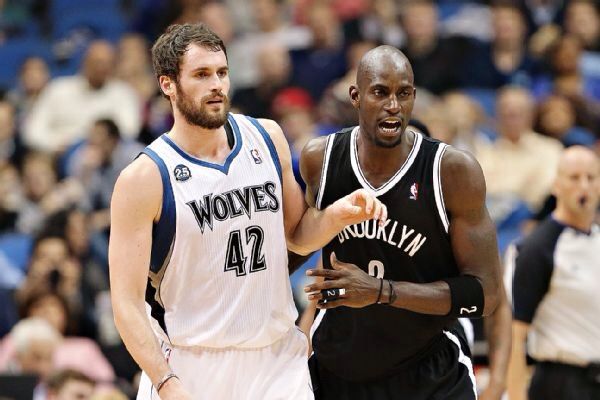 Cleveland Cavaliers forward Kevin Love offered a social media tribute to Kevin Garnett, who is entering the basketball Hall of Fame this year and, like Love, began his career with the Minnesota Timberwolves.

Big Ticket. Again reminiscing on the HOF class of 2020. Growing up watching KG, I learned a lot from him and that elite era of Power Forwards. I matched up within my first dozen games in the league…and this was in Minnesota where he spent many of his All-NBA years and played like he had more to prove. Coming off a season that he won Defensive POY, he showed me early how hard I had to work in order to score against the very best. 🙏🏻🙏🏻🙏🏻 15x All Star, 2008 NBA Champion, 03-04 NBA MVP, 9x All NBA, 12x All Defensive, 07-08 Defensive POY, 4x Rebound Champ. 🎟🎟🎟

Garnett spent 21 seasons in the NBA, beginning and ending his career with the Timberwolves. Over that span, he proved himself to be an all-around player by averaging 17.8 points, 10.0 rebounds, 3.7 assists, 1.4 blocks and 1.3 steals per game.

Both Love and Garnett managed to be part of championship teams once they were traded by the Timberwolves. Love reached that pinnacle as part of the iconic 2016 Cavaliers team, less than two years after the Cavs acquired him.

In the case of Garnett, the Timberwolves traded him to the Celtics in 2007, with Boston winning the NBA title the following year.

Their paths almost came together in Minnesota, but timing was never on their sides as Love’s NBA career began in 2008 and Garnett came back to the Timberwolves after Love had left.

Still, Love got a close on-court look at what made Garnett great and has established himself as a player who can deliver a double-double on a nightly basis.

That development has come over the course of 12 seasons for the 31-year-old Love, with the veteran having three more seasons on his current contract.

It seems doubtful that Love will be able to match Garnett’s career longevity, but he still has it within his power to one day join Garnett in the basketball Hall of Fame.

The ceremonies to induct Garnett and others, including the late Kobe Bryant, are scheduled to take place on Aug. 29. A delay for those accolades remains possible, due to the ongoing coronavirus pandemic.