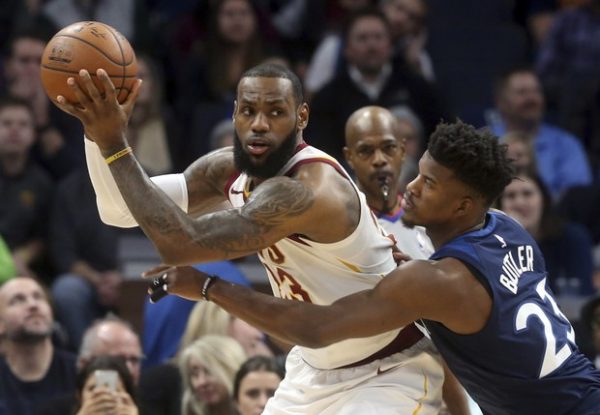 (Minneapolis, MN) — Digging themselves a monstrous hole during the first half was a clear indication of the miserable evening the Cleveland Cavaliers would endure as they were pounded by the Minnesota Timberwolves by a score of 127-99 at Target Center on Monday night.

The Cleveland starting unit managed to score just 28 points on the night, led by LeBron James‘ 10 points, eight rebounds and five assists. A trio of Cavs reserves were the only others to score in double figures, led by Jeff Green with a team-high 22, Kyle Korver with 19, followed by Dwyane Wade with 13.

From the outset, the Cavaliers struggled with their shooting during the opening two quarters, hitting on just 35 percent of their shots. On the opposite end of the court, the Timberwolves connected at a 55 percent rate over the same time frame.

“We had some really good looks at the start of the game, but they didn’t go in and we fell behind 20-4,” James said.

The Cavs missed 12-of-14 from the field to start the game, while the Wolves hit on 9-of-12 for their opening salvo. Minnesota led by as many as 17 in the first quarter, with the Cavaliers’ eight field goals for the period consisting of seven layups and a 3-pointer.

“I think we let our offense dictate our defense and we have to be better defensively,” Cavs head coach Tyronn Lue said after the game. “When we’re not scoring, things get worse on the other end.”

Things did manage to get worse in the second stanza, with the Timberwolves running off the final 11 points of the half to take a 69-42 advantage at intermission. Indicative of just how bad things were for the Cavaliers in the half was the fact that the Wolves collected 17 first-half assists and forced nine Cavs turnovers, while the trio of Kevin Love, J.R. Smith and Isaiah Thomas missed all 18 of the shots from the field.

“We got it down to 14 at the end of the first quarter, but then they came out in the second and bumped the lead back up,” James said.

That Cleveland trio would finish 4-of-29 (14 percent) for the game in that category, with Thomas ejected midway through the third quarter. That came after he was assessed a flagrant 2 foul after striking the Wolves’ Andrew Wiggins in the throat when Wiggins was en route to the basket.

“I’ve gotten numerous steals on plays like that, but I ended up hitting him in the throat and I apologized,” Thomas said.

The misery got even worse after the break, with the Timberwolves eventually leading by as many as 41 at 96-55 and taking a 102-67 lead into the final quarter. Minnesota continued to control the boards, holding a commanding 45-28 edge entering the final period, while also adding eight more assists.

“I thought they hurt us in the interior,” Lue said. “They got a lot of points in the paint.”

Garbage time had already begun by the time the fourth quarter arrived, with the Cavs managing to get the final margin under 30 points. With no drama during the fourth quarter, Cleveland managed to bump up their shooting percentage for the game up to 44 percent by hitting on 12-of-20 (60 percent) from the field.

“As a team, we had no rhythm. You have nights like this, but we need to have more energy,” Thomas said. “One good thing about this team is that we have a short memory.”

The Cavaliers will next be in action on Thursday night when they continue their road trip in Toronto with a contest against the Raptors. That game will get underway just after 8 p.m. ET.