Video: Isaiah Thomas Explains Why Playing With LeBron Will Make Cavs That Much More Lethal 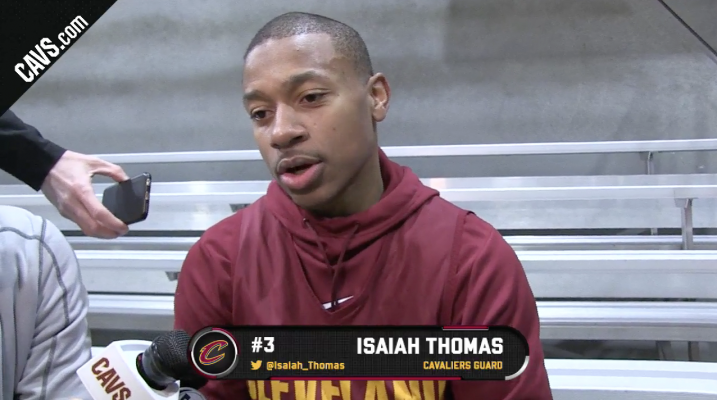 The Cleveland Cavaliers have yet to experience the full impact that Isaiah Thomas hopes to have to the court this season. He will continue to get a larger workload as he continues to approach 100 percent health, but it will likely take quite some time before the 5-foot-9 shooter is back to the form he enjoyed last season.

Still, his ongoing recovery hasn’t stopped the flashy guard from thinking about how his presence is going to make the Cavs an even better team.

On Friday, Thomas discussed his return to the court with members of the press and discussed how playing with LeBron James is going to make Thomas that much more dangerous as the season progresses.

“I’m used to two or three guys always, always on me,” Thomas began. “With guys like LeBron, and Kevin Love on the court, and J.R. Smith. They gotta respect those guys. Two or three guys are going to be on 23 so I’ve got a lot of space and it seems like the court is more open than it has been in the past for me.”

Thomas performed impressively in his Cavs debut last week, finishing the game with 17 points and three assists in just 19 minutes of play. As his minutes go up, and his confidence within the team increases, his point totals will likely grow as well.

Thomas was one of the most prolific scorers in the NBA last season. Only time will tell if he can recreate that kind of success in Cleveland, but it seems like he has very little doubt that a similar kind of production is just around the corner.