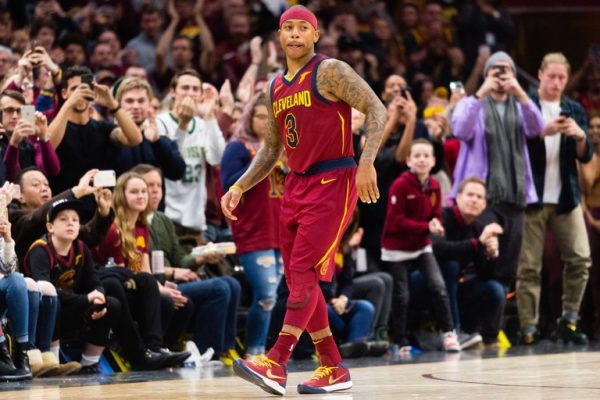 While Cleveland Cavaliers point guard Isaiah Thomas has officially made his return to the court, the transition to again be a full-time player is still in its early stages. That’s because he indicated that he’s still not fully recovered from the hip injury that’s kept him out.

Thomas pinpointed roughly where he is on the rehabilitation scale when it comes to the hip:

“Man, 80 [percent], probably,” Thomas said. “Like, I’m not in any type of shape. And then on top of where I want to be physically, I’m not as powerful as I want to be and explosive. But that’s going to come with a lot of [practice] reps and game repetitions. So, I’m getting close, but it will probably take a while until I feel like I did last season.”

Despite that issue, Thomas is still trying to find a way to do away with the limits the Cavaliers have put on his minutes, including not playing in the latter contest of back-to-back games.

“I’m trying to get them to let me play a little more. Especially [because] I played all right the first game that I played, so I’m — trust me — I’m on them about playing a little more because for the most part I feel fine,” Thomas said. “I’m a little sore, and I expected to be sore and a little stiff, but for the most part, my body feels good.”

However, Thomas remains loyal to the Cavaliers’ training staff that’s helped him through the arduous process of rehabilitation.

Thomas spoke about his feelings after seeing his first action during the Jan. 2 win over Portland. In that contest, he scored 17 points in 19 minutes.

“When I pulled up for jumpers, when I did moves, I felt like I was — I felt quick out there,” Thomas said. “And it’s been a long time for me feeling like that. But there was a few things I did out there where I’m like, ‘OK, I’m confident in doing that now.’ And I could move. For the most part, I could get where I want. It’s just that I’m not as powerful as I was last season and it’s going to take time, and I know that.

Offering a little more insight, he did acknowledge the inevitable day-after soreness, but expects that to diminish with each successive appearance.

“It is a little hip soreness, but that’s from I haven’t played in so long and then on top of that, I’m just taking care of my body with massages and things like that,” Thomas said. “So the more I get comfortable in playing in basketball games, I think the less soreness I’ll have.”

Given the uncertainty over when Thomas will be considered fully recovered, Cavs head coach Tyronn Lue is hesitant on giving a specific date.

“When will it be? I don’t know,” Lue said. “I mean just, when he’s feeling great. I don’t ever know the timetable on that, though. I don’t make that decision. They have their remedy, what they think works, so just kind of stick with it.”

Thomas and the Cavs won’t have to face the back-to-back issue until the end of January. The hope is that Thomas’ recovery will be nearly complete by that time.