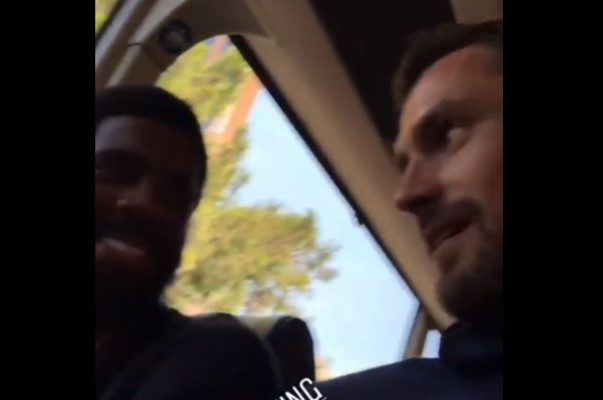 On Tuesday, the big man signed a four-year, $120 million extension to stay with the Cavaliers. The irony of it all was that Love’s name had come up in trade rumors dozens of times over the past three years. Even more ironic, the forward outlasted his former teammates LeBron James and Kyrie Irving since arriving to the organization in 2014.

Despite the unfortunate departures of James and Irving, the new face of the franchise appears to be in good standing with them. Not only did Love work out with James, but he also hung out with Irving, who surprisingly got traded a year ago:

Irving, who was drafted with the first pick in the 2011 NBA Draft, demanded a trade last summer to part ways with the a team he’d been with his whole career. The sudden request, which sent shock waves throughout the league, changed the landscape of the NBA. After all, Irving had just won a championship the year before, and probably would have become the franchise leader in a post-LeBron world.

The point guard would eventually be dealt to the Boston Celtics for Isaiah Thomas, Jae Crowder, Ante Zizic and a couple of draft picks, including the Brooklyn Nets’ unprotected first-round selection. That prized pick turned into guard Collin Sexton, who had a very impressive Summer League with the Cavs.

Regardless of the past and all the mystery, it’s good to see the two former teammates laughing and hanging out. Nothing will come in the way of the epic championship they captured together in 2016.