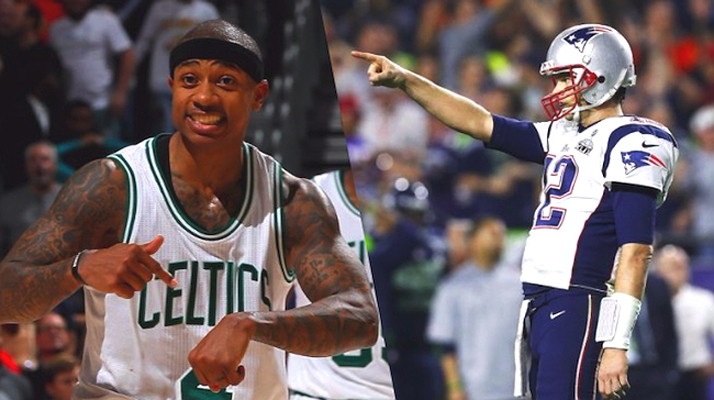 On Wednesday morning, Cleveland Cavaliers point guard Isaiah Thomas published an honest and eloquent article in The Players’ Tribune. In the article, Thomas wrote about how last week’s blockbuster trade, that sent him from the Boston Celtics to Cleveland, has changed his life.

He touched on the heartbreak of being dealt from the team he loved, the excitement of getting an opportunity to play alongside LeBron James, and what it meant to receive a text from New England Patriots quarterback Tom Brady.

Thomas mentioned that after news of the trade broke, he received many messages of support, but one message in particular had a huge impact on him:

“Like I said, when the trade news broke, I got a lot of messages. They had my texts, IG, Twitter, voicemail, you name it, just blowing up. But there was one message in particular, out of all of them, that really stuck with me. It was from Tom Brady.”

The All-Star recounted what the two had texted one another in the brief conversation:

“What’s up, IT, I heard the news. You good,” Brady texted according to Thomas.

“Yes it is. Best of luck. You’re gonna do great. Keep in touch.”

He went on to explain that it’s not what Brady said, but that he thought to text Thomas at all:

“It wasn’t about what he said, exactly — though it was cool for him to say all that, no doubt. But it was more just everything it meant, I think, that stuck with me,” he said. “To be getting a personal message like that from someone like Tom, who is such a Boston sports legend … I mean, it was bittersweet.”

Thomas admitted that he had seen Brady as a role model and that receiving a text from him reminded him that his journey in Boston was truly coming to an end:

“At first, honestly, it stung a little. I look at a career like Tom’s with the Patriots — and that’s exactly the kind of career that I had hoped to be building here with the Celtics: Being this low draft pick … coming in without acclaim … and then — through hard work, and determination, and some talent that maybe people had overlooked — just starting to win, and win, and win. And then establishing a legacy of winning. And then staying in Boston, winning titles and competing like hell, for the rest of my career — until I was considered one of the all-time Boston greats,” he said. “That’s the career that I had started to map out for myself. In my mind, I wanted to be the Celtics version of Brady and Ortiz. I wanted this next era of Celtics basketball to go down in history — and I wanted to go down in Boston sports history with it. So when I got that text from Tom, you know, there was part of me that felt a little down.”

The more he thought about it, however, he realized that even though his time in Boston was short, he clearly had an impact on the city:

“But then I thought about the text some more … and I think I changed my perspective a little. I think I realized that, like, Yo — that’s Tom Fucking Brady. And I was only here for two and a half years. Tom Brady isn’t sending a text like that to guys who played in Boston for only two and a half years — unless they did something very special. So maybe, I don’t know … maybe that’s something to be proud of. And maybe, my time here … even if, in the end, I guess it wasn’t quite what I’d dreamed it would be — maybe it still meant something to some people.”

As if his play last season weren’t enough, Thomas’ article has made it clear that the Cavs have gained a very special player. While it may be a while before Thomas becomes as beloved in Cleveland as he was in Boston, it seems like it’s only a matter of time.