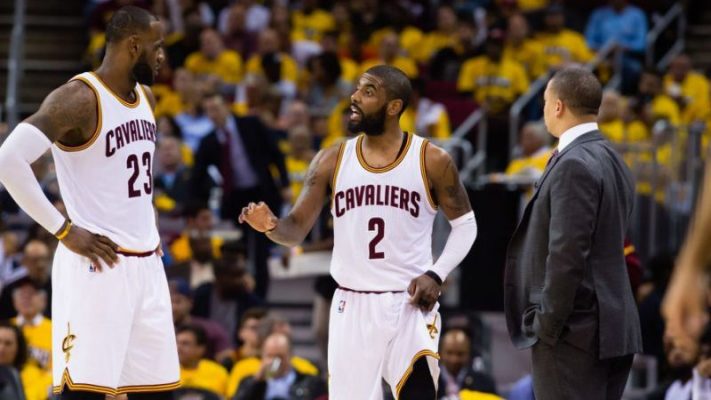 The Cleveland Cavaliers are set to face the Boston Celtics on Wednesday night, with former Cavaliers point guard Kyrie Irving the focal point of most of the pregame conversation. One anecdote from last season involving Irving and the team’s current head coach Tyronn Lue offers some insight into how the point guard came to make his shocking trade request last July that ultimately landed him with the Celtics.

ESPN’s Jackie MacMullan’s lengthy article looks at a number of different factors involved, focusing on Irving’s unhappiness with his situation at the time. The trade request that eventually came about wasn’t something that materialized quickly, but instead, was something that evolved over an extended period of time.

At roughly the midway point of the 2016-17 season, Irving and Lue exchanged words over the team’s pace of play:

“Because if we play faster, we get shots off easier.”

“I don’t need to play faster to get my shot off,” Irving replied. “I can do that anytime.”

Lue reportedly walked away simply shaking his head, with the two leaving the issue unresolved.

Irving recently reflected on the controversy with some level of regret:

“At that time, we had probably lost a few [games],” Irving says now. “[Lue] is coming up to me and saying, ‘We’ve got to play faster,’ and I probably wasn’t willing to accept it at the time. So maybe I’d like a do-over on that.

“But those conversations go on every day in the NBA. In this case, instead of those things being addressed so you can move forward, it gets held on to, and it becomes a big thing. I was trying to figure out where I fit in and at the same time asking myself, ‘What’s best for the team?’ Sometimes, I didn’t know the answer. I had to figure it out on my own. It wasn’t like I was getting answers from everyone else.”

Lue and Handy acknowledged the dispute, though Lue was reluctant to extend the discussion:

“Kyrie is a great player,” Lue said. “Please tell him I wish him the best.”

The Cavaliers and Celtics met in last year’s Eastern Conference Finals and are favorites to do so again this season. If that occurs, Irving and Cavs point guard Isaiah Thomas will likely be pitted against one another, having switched jerseys from that previous matchup. However, in Wednesday night’s contest, Thomas will be sitting out after a strong debut in Cleveland’s Tuesday night victory.