Don't Miss
Home / Editorials / The Raw Data: Numbers Without Kevin Love And Kyrie Irving That May Give Cavaliers Fans Hope

The Raw Data: Numbers Without Kevin Love And Kyrie Irving That May Give Cavaliers Fans Hope 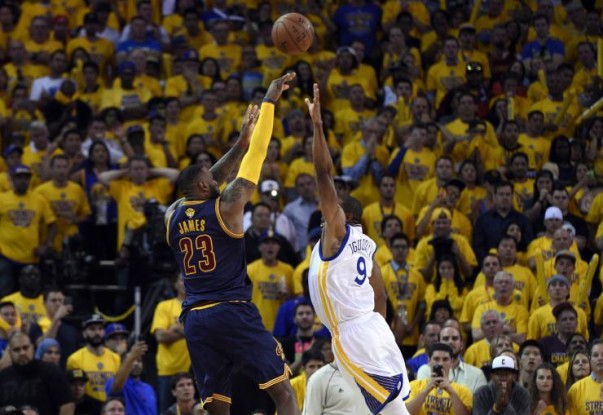 One of the more esoteric statistics for this season might help wipe away some of the gloom and doom that pervades the psyches of many Cleveland Cavaliers fans by giving them hope that LeBron James and the remaining squad can come back to win this NBA Finals series against the Golden State Warriors.

The statistic, which was uncovered by John Schuhman of NBA.com, shows that the Cavaliers were actually very productive when James was on the court without the assistance of both Kyrie Irving and Kevin Love. 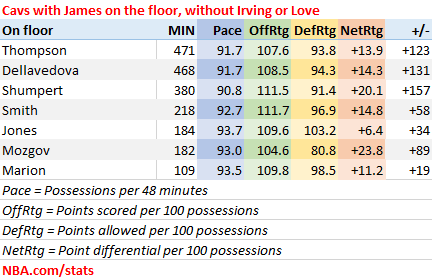 In the 545 minutes when James was on the court without Irving or Love (the equivalent of just over 11 games), the Cavs were able to outscore their opponents by a total of 149 points.

James and five other players made up two separate lineups, both of which were successful in separate ways. Three players: Matthew Dellavedova, Iman Shumpert and Tristan Thompson, were in both of the lineups, while J.R. Smith and Timofey Mozgov were the lone interchangeable parts.

When Smith was in the three-guard lineup, the offense flowed smoothly, while the defense thrived when Mozgov was part of the lineup instead.

In truth, the numbers didn’t work as well in Thursday night’s game, with the Cavaliers instead finding themselves 13 points behind in the time Irving was off the court. That total amounted to less than 10 minutes.

A small portion of that could be attributed to the team’s slide in overtime, with Cleveland head coach David Blatt saying they came into that extra session flat. That attitude undoubtedly deflated even further when Irving was needed to be helped off the court with two minutes left in overtime.

Another reason for the poor numbers stems from the meager contributions from both Smith and Shumpert. Smith looked to be on his game, closing out the first half with a three, but he was stone cold the rest of the contest.

Still, James was able to put up 44 points against a Golden State team known for their defense—after putting up 42 in his other game against them in February. With two days to go over more film on how he’s being defended, James is no doubt continuing to search for any nugget that will either boost that point total or open up the floor to make it easier for his teammates to score.

While some may consider these numbers to be grasping at straws in order to keep hopes alive, the numbers will undoubtedly tell the story over at least the next three games. The Cavaliers are certainly hoping that it becomes a storybook for the ages.