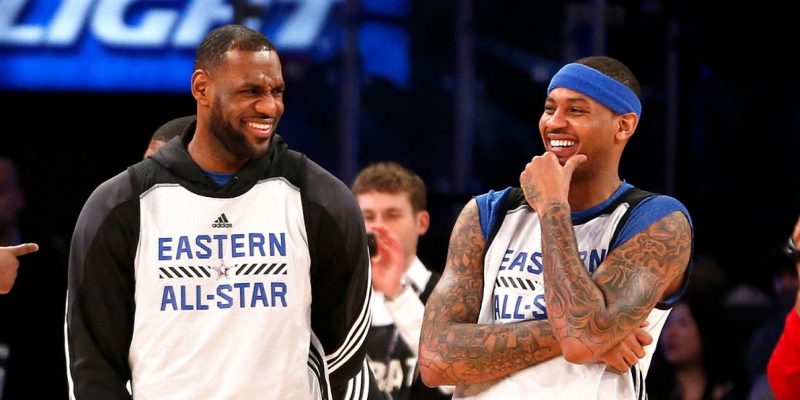 LeBron James‘ NBA future is unknown to everyone but James himself. While the Cleveland Cavaliers would prefer to never see him suit up in another jersey ever again, the rumor mill regarding his future will likely only accelerate as we get closer to the 2018 NBA offseason.

James’ most likely destination if he does in fact decide to leave Cleveland seems to be Los Angeles, but if Carmelo Anthony had gotten his way, he and several of his All-Star buddies would’ve been playing for the Houston Rockets next season.

According to ESPN’s Ian Begley, Anthony spent time this past offseason talking to both James and All-Star point guard Chris Paul about joining up in Houston to take on the Golden State Warriors for control of the Western Conference and the NBA.

In fact, Anthony was not only heavily linked to Rockets, but to the Cavs as well. Those two destinations fell through though, and Anthony was eventually traded to the Oklahoma City Thunder.

“Anthony, along with most of the rest of the NBA, said in September that he strongly believed he’d be traded to Houston in early July. He’d been talking to friends about teaming up with Chris Paul and, eventually, LeBron James in Houston and how the Rockets could match up with the defending champion Golden State Warriors. He went as far as to detail individual matchups between that hypothetical Rockets team and the Warriors, surmising that he and the Rockets could take out the Warriors. For most of the offseason, Anthony was confident that the Knicks and Rockets would get a deal together,” wrote Begley. “One potential trade involving the Bucks as a third team, with Jabari Parker headed to New York, was discussed. The Lakers and Trail Blazers, among other teams, had interest in dealing for Anthony. But ultimately, nothing came to fruition. Anthony was stuck in New York until new president Steve Mills and general manager Scott Perry moved him to Oklahoma City shortly before training camp.”

Anthony is now playing for a Thunder team that has failed to find a rhythm this season as he and teammates Paul George and Russell Westbrook struggle to find the chemistry needed to compete. Anthony is currently averaging just 17.3 points per game, the lowest average of his 16-year career.

As for the Rockets, they seem to be doing just fine without Anthony. They currently hold the best record in the Western Conference thanks to a recent 14-game winning streak and show no signs of slowing down. Anthony will have the option to opt out of the last year of his deal this upcoming offseason, but with the success the Rockets have enjoyed thus far, it remains to be seen whether or not they would even want to sign him.

At the moment it seems like Anthony’s goal of joining forces with both Paul and James in Houston is not much more than the pipe dream. One thing is for sure though, with the incredible amount of star power hitting the market this offseason, the NBA landscape could be drastically different by this time next year.