Cleveland Cavaliers vs. Washington Wizards Game Recap: Messed Around and Got a Triple-Double 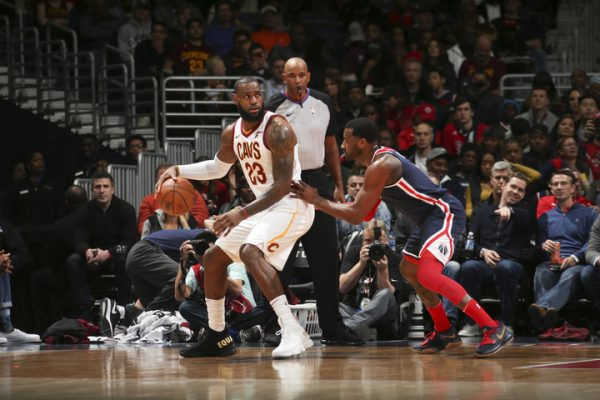 (Washington, DC) — Yet another triple-double and an all-around fourth-quarter performance by LeBron James helped the Cleveland Cavaliers knock off the Washington Wizards by a score of 106-99 at Capital One Arena on Sunday night. The win now gives the Cavs 18 wins in their last 19 contests.

The third consecutive triple-double for James, the second time he’s accomplished that feat, was the 61st of his legendary 15-year career and his fourth in the last five games. During that fourth quarter, James tallied seven points, hauled down seven rebounds and dished out four assists.

“I wasn’t very efficient from the floor tonight (8-of-23), so I gotta be able to implement ways to be effective on the floor,” James said. “I get rebounds, start getting my guys involved and they made the Washington defense pay.”

The Wizards led 89-87 with 9:36 left in the game, but it was James that sparked a 17-4 run with a 3-pointer just 21 seconds later. That surge gave Cleveland enough of a cushion to pick up the win, with the team also clamping down on defense in that final period to limit Washington to just 32 percent shooting from the field.

“We showed effort in contesting the threes and that made a huge difference,” J.R. Smith said about how the fourth-quarter defense was able to deliver.

James ended the night with 20 points, 15 assists and 12 rebounds, with Kevin Love narrowly missing a double-double with 25 points and nine rebounds. Others to score in double figures were Jeff Green and Kyle Korver who scored 15 and 11, respectively. While Smith only scored seven points, he also grabbed nine rebounds.

“We had to make plays in the last five or six minutes and we were able to do that,” Love said.

Another key component was the team’s bench once again being effective by spreading 40 points among five different players.

“We came together collectively and did what we had to do,” Green said of the bench production.

Despite Cavs head coach Tyronn Lue having indicated on Saturday night that Tristan Thompson would sit out the back end of the back-to-back, the center played 15 minutes and contributed four points.

“The win was the most important thing,” Lue said. “This was a crazy game.”

Both teams started out hot, with the Cavs hitting 6-of-9 from the field to get things started, while the Wizards countered by connecting on 5-of-8 at the outset. However, for the remainder of that first quarter, the Wizards struggled by hitting just 21 percent their shots from the field.

“For somebody to go from shoot, shoot and shoot to transition my game into more defensive and team-oriented, it shows me what it is to be a leader to the younger guys and try and motivate them,” Smith said.

The Cavaliers managed to hold a 27-23 advantage after the first 12 minutes, but couldn’t take control of the game during the first half and headed to intermission deadlocked at 60 apiece. The chief problem was the Wizards’ domination on the boards, holding a 29-17 advantage in that category. Included in those 29 rebounds were 10 on on the offensive side, which afforded Washington a number of second-chance opportunities.

“This is the toughest game of the season so far,” James said immediately after the game. “Utah gave us everything they had last night and then to play a team that’s had a couple days of rest and a 6:00 start, that’s a tough turnaround.”

The two teams exchanged a number of leads once play resumed, though neither unit managed to build more than a four-point advantage. The Wizards had held an 83-79 lead with 1:39 to play in the third period, but the Cavs managed to score the final four points of the quarter to tie the game at 83 leading into the final period.

“I thought our defense was great, especially holding them to 39 points in the second half and 16 in the fourth,” Lue said.

The Cavaliers will stay on the road for their next matchup, which takes place on Tuesday night against the Milwaukee Bucks. Tipoff for that contest is set for just after 8 p.m. ET.