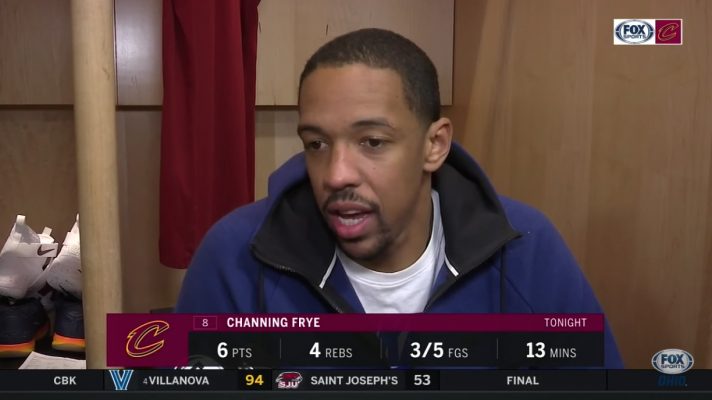 In the Cleveland Cavaliers‘ first 23 games of the 2017-18 NBA season, LeBron James has staked a large claim toward winning his fifth Most Valuable Player award. However, teammate Channing Frye believes that James’ performance thus far is only a sample of what the 15-year veteran is capable of for the remainder of the season.

Frye spoke after the Cavaliers’ Saturday night win over the Memphis Grizzlies:

“Everyone was talking like, ‘Hey this is not playoff LeBron,'” Frye said. “You know, usually LeBron gives you about 60 percent. This is about 80 percent LeBron and it’s looking effortless, so I’m pretty scared.

“I mean this is 80 percent engagement. You know, he’s engaged on offense and defense. You know tonight he really didn’t have a lot of rebounds, but every night, he almost has a triple-double. He’s shooting the ball well. He’s seeing the game a lot better. He’s diverting to his teammates and that’s pretty scary.

“You know, he adjusted today. They were double-teaming him from the bottom, so then he moved to the elbow. So once he starts adjusting and he starts getting the ball, screen-and-roll. So, you’re seeing post-up pass LeBron, post-up score LeBron, shooting threes LeBron. So there’s a lot of different aspects to that and so when I say 80 percent, I mean engagement every single game.”

The idea that James could be even more impressive than he’s already been is something that might be cause for concern around the league. Entering Monday night’s game, James is averaging 28.3 points, 8.7 assists, 7.9 rebounds, and is shooting 58.3 percent from the field and 41.3 percent from long-range. If that wasn’t enough, he’s also been huge during the fourth quarter, including scoring the final 13 points for the Cavaliers in Saturday night’s victory.