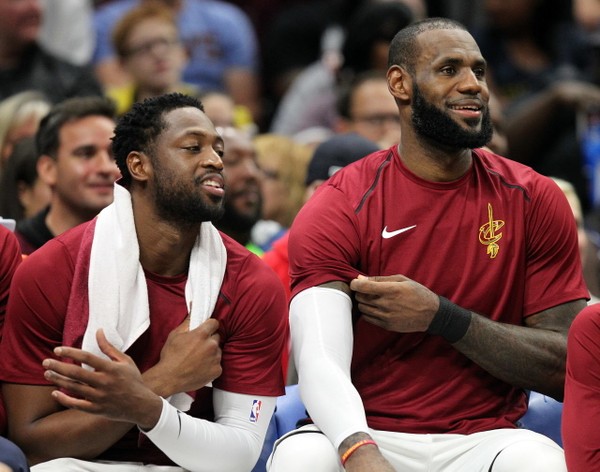 When the Cleveland Cavaliers signed Dwyane Wade during the first week of the team’s training camp in September, the idea of adding a future Hall of Famer to a roster with LeBron James on it was perceived to be a popular decision. However, it now appears that not all members of the team were as enthusiastic as James.

The apparent conflict was explained by James to Jason Lloyd of The Athletic:

“There was a couple guys with it, but it wasn’t a lot,” James said. “I still know what he’s capable of doing. Why wouldn’t you want another guy in the locker room that brings a championship mentality and a guy who can still play? So, of course, it bothered me, but f— it. It is what it is.”

Part of the reason that some controversy existed was that inserting Wade into the starting lineup had led to beloved veteran Richard Jefferson being traded and J.R. Smith being put in the position of coming off the bench.

When the Cavaliers got off to their weak start, Wade volunteered to switch roles with Smith, with the team’s nine-game winning streak helping calm the situation.

“For me, coming here, knowing I could be on the second unit and all the guys that could be on that unit, I thought that was important for me to come,” Wade had said to Joe Vardon of Cleveland.com.

“That’s why I took myself out of the starting lineup early, because I knew that would be the most important thing for this team, to be on that unit. That’s what I thought coming here.”

During that winning streak, Wade’s numbers have seen a slight uptick from his stats as a starter for the Cavaliers. He’s been averaging 12.9 points, 5.2 rebounds and 4.1 assists, while also aiding the defense by averaging 1.1 steals during this torrid stretch.

Wade’s output has been important for a backcourt that still awaits the return of the injured Isaiah Thomas and remains in limbo with regard to the status of injured point guard Derrick Rose.