Kyle Korver Proving to Be Cavs’ Most Important Signing of Offseason 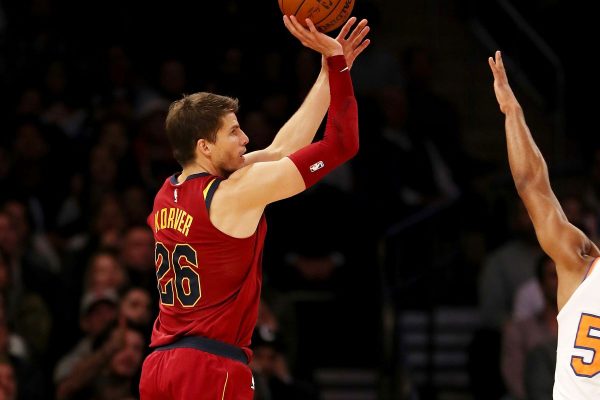 When the Cleveland Cavaliers traded for Kyle Korver last January, the expectation was that the veteran would be another solid addition to the team’s arsenal of three-point shooters. Korver has more than lived up to those expectations, with a recent performance also putting on display his ability in the clutch and serving as a key reason for the Cavs’ current four-game winning streak.

Wednesday night’s win at Charlotte saw Korver finish the night with 11 points, modest numbers in comparison to his two preceding contests. Still, his two 3-pointers, the first of which ended the third quarter and the second which marked the Cavs’ first field goal of the fourth period were important. The first gave the Cavaliers the lead for good at 86-84, while the second boosted the team’s lead back up to five points at 91-86. In the case of the latter basket, the Hornets never got any closer over the rest of the game.

Of course, attempting to match the heroics of his previous two contests would have been next to impossible. In last Saturday night’s victory over the Dallas Mavericks, Korver notched all 13 of his points during the final quarter, connecting on a trio of 3-pointers as a part of that barrage. The first two came early in the period, with the third serving as his biggest shot of the night after Dallas had run off 10 unanswered points to cut the Cavaliers’ lead to one-point at 91-90. A layup would later give the Cavs some breathing room and his two foul shots in the final minute helped put the game away.

Just two nights later, Korver managed to top that effort by scoring 19 points during Cleveland’s furious rally from a 23-point deficit. Korver had started the game shooting 1-for-8 from beyond the three-point line, but remained undeterred. That confidence paid off when he hit on four more 3-pointers and then once again put the game away with four free throws in the final minute.

Perhaps the clearest indicator of just how deadly Korver has been during the fourth quarter this season is his 56 percent three-point shooting in the period. That number is in contrast to his three-point average during his lengthy career, which is 43 percent overall. Both numbers help explain why the Cavs were eager to acquire him last season.

Breaking down those 2017-18 season numbers even further, Korver has especially thrived when the fourth quarter gets past the halfway point. In those final six minutes this year, he’s hit on 9-of-13 on his long-range bombs. In addition, while the Cavs as a whole have so far struggled at home, Korver’s fourth-quarter numbers show that he shouldn’t be subjected to too much blame for the team’s 4-4 record at Quicken Loans Arena. That’s because he’s connected on 12-of-21 from deep in front of the home fans.

Some people may believe that Korver has to be on fire with his three-point shot for the Cavaliers to win, but the numbers don’t necessarily bear that out. He was just 3-for-10 in Wednesday night’s victory, and the Cavs have won two of the five games in which he’s been held to less than two 3-pointers during a game.

Another misnomer is the idea that keeping Korver on the court for as much of the game as possible will benefit the Cavaliers. The reality is that in the season’s first 15 games, Korver’s sweet spot when it comes to playing time has been 18 to 22 minutes per game. When he’s kept within that range, he’s hit on 52 percent of his 3-pointers, but more importantly, the Cavaliers have managed to win five of six games.

Korver, who turns 37 on St. Patrick’s Day (Mar. 17), has had more than the luck of the Irish when it comes to his long-range shooting prowess. Over his career, which is currently in its 15th season, he’s knocked down 2,090 3-pointers (through Friday night’s contest), with fellow bombers Jamal Crawford and Vince Carter close behind him. Presently, that places him fifth all-time in this category, with a move up to the fourth spot expected soon, since he’s currently just 54 3-pointers away from passing Paul Pierce.

Joining in on the Fun

Having at least temporarily gotten back on track with four straight wins, the Cavaliers will need other players to step up like Korver has during this winning streak. The turnover on the Cavaliers’ roster this season has thus far resulted in a three-percent dip in three-point shooting percentage, so bumping up the number in this specific category will lessen Korver’s burden.

This year’s numbers show that when the Cavs hit 39 percent or better from long-range, they’re 5-1, after going 31-10 when passing that threshold last year. In a league that now prizes hired guns like Korver, his value becomes clearer with each passing game.