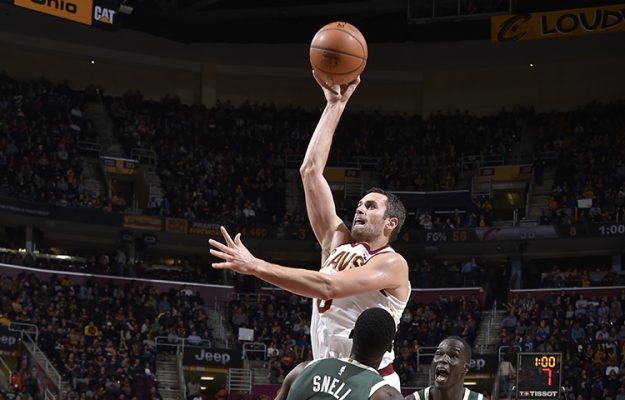 (Cleveland, OH) — Behind a combined 62 points from Kevin Love and LeBron James, the Cleveland Cavaliers shook off their frustrating loss on Sunday by holding off the Milwaukee Bucks with a 124-119 victory at Quicken Loans Arena on Tuesday night.

Love notched a double-double with 32 points and 16 rebounds, scoring 14 of his points at the free-throw line. Meanwhile, James narrowly missed a triple-double by scoring 30 points, dishing out nine assists and grabbing eight rebounds. Love’s 16 free-throw attempts matched the output in that area for the entire Bucks team, while James scored 10 of his points during the final quarter, including seven of the last nine down the stretch.

“I think we were super-aggressive getting to the free-throw line. We got in the bonus early and that started us out right on both ends of the floor,” Love said. “We had a lot of communication on the defensive end.”

Cavaliers head coach Tyronn Lue spoke during his postgame press conference about the focus on getting Love more involved in the offense.

“We wanted to make sure that we did a good job of featuring Kevin,” Lue said. “We know playing the 5, it’s going to be tough to post him against big guys, but they did a lot of switching and he went to work for us.”

In that final period, the Cavaliers led by as many as 11 points before a Bucks rally sliced the margin to four points with 1:37 left. However, James’ heroics helped improve the Cavs’ season record to 5-6 on the year, with eight different Cavaliers players scoring during the quarter.

A welcome sight during the contest was a strong performance by J.R. Smith, who finished with 20 points. Having begun the season with shooting issues, Smith finished the night by hitting 7-of-12 from the field, including 5-of-7 from beyond the three-point line. The only others to reach double figures in scoring were the backcourt duo of Derrick Rose and Dwyane Wade, who each finished with 10 points.

“J.R scoring the basketball is big for us,” Lue said. “I think he took his shots in rhythm.”

“When he’s able to hit a couple of shots at the start of the game, we try and get him the ball,” James said.

Smith himself decided to simply go back to his past mindset entering the game in an effort to shake off his doldrums.

“I just wanted to keep the same mentality and shoot it every time I touched it,” Smith said.

The Cavaliers seemingly had no answer until the fourth quarter when it came to stopping the Bucks’ Giannis Antetokounmpo, who finished with 40 points and scored in double figures in each of the first three periods. He fouled out with 18.4 seconds remaining in the game.

“He attacked non-stop and you have to put multiple bodies on the floor against him,” James said. “He’s great in transition.”

Getting the memo about playing with a sense of urgency, the Cavaliers jumped out to an early 9-2 lead and managed to be aggressive in getting to the hoop all during the first half. During those two quarters, they were 19-of-22 from the free-throw line and had a strong opening period offensively by scoring 39 points and connecting on 69 percent of their shots from the field.

“I thought we had a good defensive mindset and I thought our defensive energy was up,” Lue said about the Cavs’ first quarter. “We did a good job of attacking the paint, attacking the basket.”

However, the continuing defensive issues that have plagued the Cavs resurfaced during a second period that saw the Bucks hit on 70 percent of their shots from the field, with many of those coming on easy drives to the basket. Cleveland held a 39-28 lead after one quarter and led by as many as 13 before Milwaukee went on a 23-9 run for most of the final eight minutes of the half to take a 67-65 lead to intermission.

The third quarter was tightly contested, with neither team able to take control. The Cavs continued to struggle trying to keep Antetokounmpo, who had 36 points through the first three periods, in check. By the time the horn had sounded, the Cavaliers held a 94-90 advantage with 12 minutes left.

The Cavaliers now hit the road for the next four games, with the first contest set for Thursday night. That’s when they’ll face the Houston Rockets in a game set to be broadcast by TNT, with tipoff set for just after 8 p.m.