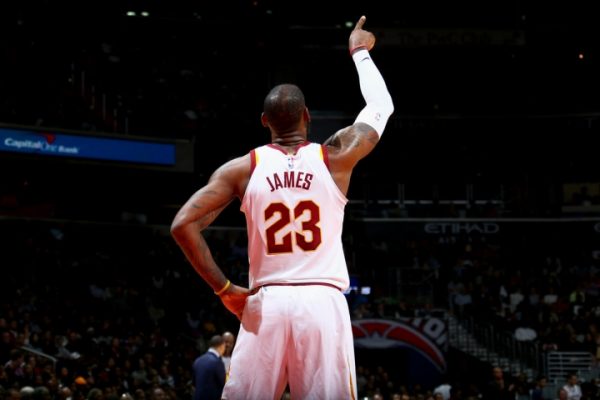 (Washington, D.C.) — Paced by 57 points from LeBron James, the Cleveland Cavaliers put an end to their frustrating four-game losing streak with a badly-needed 130-122 win over the the Washington Wizards at Capital One Arena on Friday night.

James, who turns 33 at the end of next month, hit on 23-of-34 from the field, adding 11 rebounds and seven assists. For good measure, he was a perfect 9-for-9 from the line, collected three steals and blocked two shots. He scored 15 in the first quarter and followed that up with periods of nine, 14 and 19 points.

“Every shot I put up tonight, I felt was going in,” James said after the game. “We were finally able to sustain our effort for close to 48 minutes.”

The scoring outburst marked James’ highest scoring output as a Cavalier, surpassing the 56 points he scored on March 20, 2005. During his four years as a member of the Miami Heat, James achieved his highest scoring game with a 61-point effort in 2014. From a career perspective, James has now scored over 29,000 points in his storied career.

“I had to do what I had to do to help us get off this losing streak,” James said. “I ain’t about losing. It’s not about talking, it’s about making it happen and that’s what I had to do. I haven’t scored like that it in a while, but I’ll take it.”

James played 42 minutes in the contest, but never gave a thought of taking an extended breather as the game progressed.

“We needed this win, so I had no intention of coming out,” James said.

One of four Cavaliers to score in double figures, James was joined by Derrick Rose, who contributed 20 points. Meanwhile Jae Crowder closed out his night with 17 points and seven rebounds, and Kevin Love contributed 11 points and eight rebounds.

“D. Rose set the tone early, getting in the paint, playing with pace,” Cavs head coach Tyronn Lue said during his postgame press conference. “We had energy for all 48 minutes.”

The win marked the first game without the services of center Tristan Thompson, who’s expected to miss the next month after straining his left calf during Wednesday night’s home loss to Indiana.

“We played with a little more desperation tonight and it made a difference,” Crowder said. “It’s still an uphill battle for us. We take it one practice at a time, one game at time. We’ll continue to get better.”

During the opening quarter, both teams scorched the nets by connecting on a combined 31-of-43 of their field goals. The Cavaliers were especially torrid, hitting on 77 percent (17-of-22) of their shots, with the duo of James and Rose combining for 28 points as each hit on 6-of-7 shooting. By the time the quarter had ended, the Cavs held a 42-36 advantage.

Both teams cooled off somewhat in the second period, though each made frequent trips to the foul line. The aggressive first-half approach of the Cavaliers could be seen not only in getting to the charity stripe, but also in their eight steals. For a good portion of the first two quarters, the Cavs defense kept the Wizards’ backcourt duo of John Wall and Bradley Beal in check, holding them to a combined nine points during the first 20 minutes of action.

A physical third quarter saw the intensity of the contest pick up, with the Cavaliers using a 16-5 surge to turn a 76-70 advantage into what seemed like a comfortable 92-75 lead. However, the Wizards ran off eight unanswered points in less than two minutes, though the Cavs managed to get the lead back up to 11 at 94-83 by the time the period had ended.

In the final period, Cleveland managed to maintain a double-digit lead for most of the quarter, with Washington unable to get any closer than six points. James helped put an end to the Wizards’ final charge and closed out his own scoring by connecting on a three-point play in the final moments.

“Every night, he’s dominant and tonight, that’s what everyone talks about when they mention him as the greatest player on the planet,” Dwyane Wade said.

The Cavaliers return home for a Sunday afternoon home matchup at Quicken Loans Arena against the Atlanta Hawks, the first of two home games before the start of a four-game road trip. Tipoff will be just after 3 p.m. ET.

“It was very big to come here and beat a good team on their home floor,” Lue said. “It felt good, we needed it.”