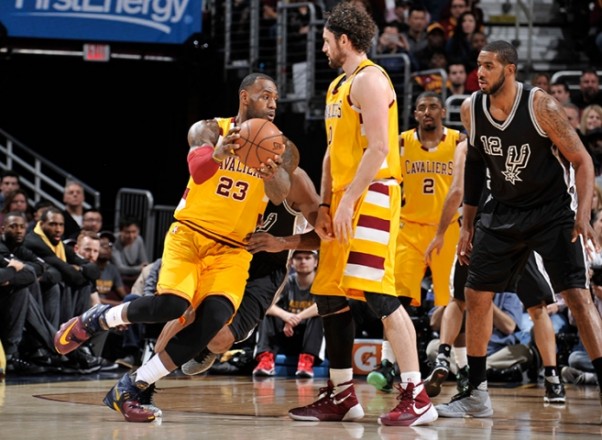 (Cleveland, OH) – Powered by 71 points from the “Big Three” of LeBron James, Kyrie Irving and Kevin Love, the Cleveland Cavaliers won their fourth straight game with a 117-103 victory over the San Antonio Spurs Saturday night at Quicken Loans Arena.

James led the trio with 29 points, adding seven assists, five rebounds and a pair of blocked shots. Irving contributed 21 points and six assists, while Love added yet another double-double with 21 points and 11 rebounds.

Love did the majority of his scoring damage in the first half when he led the way with 18 points (including 14 in the first quarter), while James came alive during the third quarter, with 16 points during the period.

In postgame remarks, Love was asked what was behind his recent boost in production:

“I think confidence, just picking my spots on the floor,” Love said. “Ty (Lue) has been putting me in good spots.”

The contest also marked the fourth consecutive game that the team has scored at least 114 points, an indication that the faster-paced play sought by new Cavs coach Tyronn Lue is taking hold with the team. San Antonio had entered the game with the top defense in the NBA, allowing just 90.6 points per game.

Aiding the Cleveland offense in that department was 55 percent field goal shooting on the night, while the team committed just nine turnovers, including only two in the first half.

Afterwards, James spoke about the new focus on offense:

“We’ve been pushing the pace and Coach Lue has been on us to keep moving,” James said. “I think we’re getting used to it.”

The Cavaliers were in control for much of the game, holding a double-digit advantage over most of the final three quarters. They benefited from the continued absence of Spurs’ veteran power forward Tim Duncan, who sat out his third consecutive game with knee trouble. His absence, coupled with early foul trouble from LaMarcus Aldridge, put San Antonio in a bind they were unable to escape.

Despite the absence of Duncan, Lue was happy with the victory:

“It was a good win over a great team that will give us confidence,” Lue said.

The tone was set early after San Antonio took an early 4-1 lead. Cleveland ran off nine straight points and only allowed the Spurs to get as close as two points twice soon after. From that point, the Cavs were able to continue to boost their lead.

The Cavaliers used nine unanswered points early in the second quarter to take a 46-32 advantage. By the time the halftime horn sounded, they were able to make it a 17-point margin at 66-49.

The Spurs had made a pair of third quarter efforts to get back in the game, beginning with eight straight points to start the quarter to slice their deficit to nine. However, James injected the Cavaliers’ offense with his surge to boost the spread back up to 16 at 92-76 by the end of the quarter.

“It’s a good sign for us,” Love said. “We’re adjusting on the fly to what we want to accomplish with Ty.”

The Cavaliers now hit the road for a pair of contests, the first coming in Indiana on Monday night where they’ll seek to end a 10-game losing streak at Bankers Life Fieldhouse. Included in that streak were two tough losses last season. Tipoff is set for just after 7 p.m. ET.