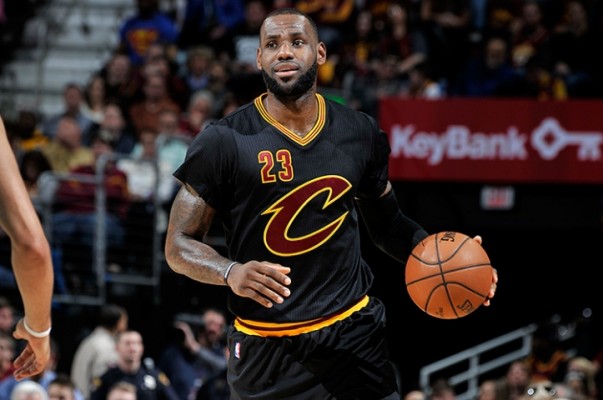 (Cleveland, OH) – Behind a combined 83 points from the trio of LeBron James, Kevin Love and J.R. Smith, the Cleveland Cavaliers notched their third consecutive victory with a 112-103 win at Quicken Loans Arena on Sunday afternoon.

“I think we played a really good game,” James said after the game. “Coming off a tough win on the road in Atlanta after that back-to-back, we had enough energy to get this one. It was a really good win and we took a step forward again.”

Smith’s presence in today’s “Big Three” was due to the fact that Kyrie Irving was unable to play due to a sprained ankle, but Matthew Dellavedova acquitted himself well in Irving’s starting slot, dishing out nine assists, scoring six points and grabbing five rebounds.

“I think we have pretty good chemistry and understanding,” Dellavedova remarked after the game about his on-court play with James. “He’s great on the move and really dangerous on the move getting the ball. So I’m just trying to find him in different spots.”

Still, the victory offered some white-knuckle moments for fans after the Cavs entered the fourth quarter with a 15-point advantage after leading by as many as 21. They then watched the Hornets methodically whittle the margin down to four at 96-92 with 4:25 remaining in the game. However, three-pointers by Smith and Love sandwiched between a James layup over the next few minutes gave Cleveland enough room to hold on for the win.

“He’s been leading by example,” Lue said. “Knowing that the playoffs are coming up and we have to get ready for this stretch and take every game and practice seriously. I think he’s done a great job of setting the tone for us.”

The Cavaliers ended the game with 32 assists and 12 three-pointers, but two negatives from the final stats stood out in their 18 turnovers and seven missed attempts from the free-throw line.

“When the ball is moving and the ball has energy, we’re confident and shooting it,” James commented after the game. “We’re not a team that just wants to pull up in transition, but when the ball is moving from side-to-side and guys are the recipient of a few passes in the possession, that’s key for our team.”

The Cavaliers will now face a tough pair of road divisional matchups when they travel to Milwaukee and Indiana on consecutive nights. Their Tuesday game against the Bucks will tip off just after 8 p.m. ET, while the Indiana clash on Wednesday is set to get started one hour earlier.