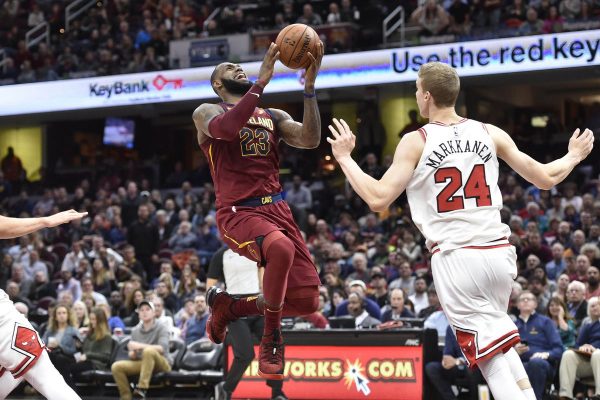 The Cleveland Cavaliers rolled to their third win of the season on Tuesday night, beating the Chicago Bulls 119-112. Leading the charge for the Cavs was LeBron James, who finished the game with 34 points, 13 assists, two rebounds, and three steals.

While James’ monster stat line might’ve been a cause of frustration for Bulls rookie Lauri Markkanen, who was charged with guarding the four-time NBA MVP, he saw the challenge as a lifelong dream coming true.

“First of all, it’s a dream come true for me,” Markkanen said following the game. “Because he was my favorite player growing up. To get to go against him, he’s a pretty tough guy to guard.”

Markkanen, who finished the game with 19 points, eight rebounds, and one block, should be happy to know that the admiration is mutual. Following the game, James sung the Finnish native’s praises.

“Very confident,” James said of Markkanen. “Watched him a lot at Arizona. Watched him a lot. He wore my shoe a couple times … he wore my retro Brons a couple times. I like that. I had to stay up very late to watch those Arizona games. A very confident kid, shoot the heck out of the ball. He’s going to continue to get better. The best thing about it is he’s getting an opportunity. If he makes mistakes, he can learn on the fly, but he’s going to play a lot. He’s good. It seems like he’s learning. He’s a good player.”

It is sometimes easy to take James’ impact on basketball for granted. As his career continues, however, and as young players begin their NBA careers dreaming of mimicking his success, it will become more evident just how much James has done for the game and for those who play it.