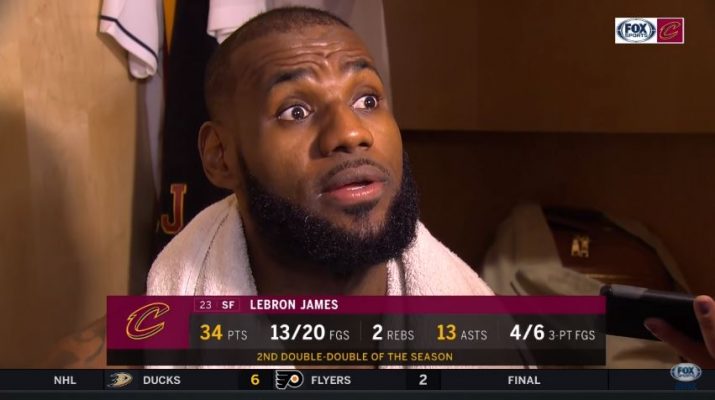 Cleveland Cavaliers fans may have learned something new about LeBron James on Tuesday night after his team defeated the Chicago Bulls, 119-112, en route to the Cavs’ third victory of the season.

Before the matchup, Tyronn Lue made several changes to the starting lineup, one of which included slotting James at the point guard position. The four-time MVP flourished at the 1 as he finished with 34 points and 13 assists and was asked by Dave McMenamin of ESPN.com afterwards if his approach toward the game changed due to the position change.

“I think the best thing for me personally is that ever since I was a kid I’ve always learned every position on the floor,” said James. “When I started playing ball for some odd reason I could learn every single position on the floor all at one time: point guard, shooting guard, small forward, power forward and center. And know all the plays [that] they’re doing and what’s the reads.

James is simply scorching to start the 2017-18 campaign, and the scary part is the Cavs seem to need all the help they can get from their leader. So far through four games, The King is averaging 27.3 points, 6.8 rebounds, and 8.0 assists on a blistering 61.4 percent from the field and career-best 88.2 percent from the line.