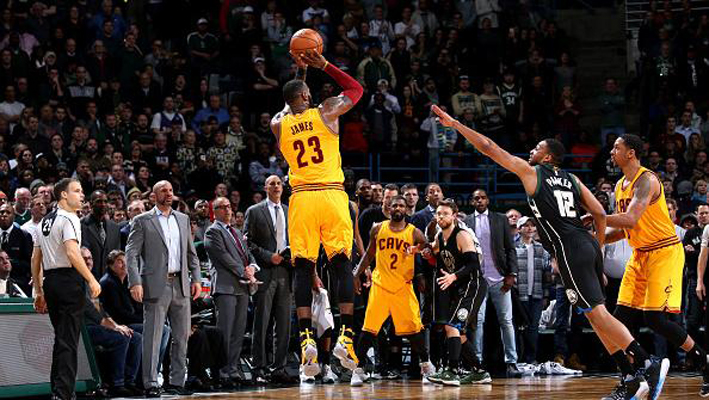 The thought of Cleveland Cavaliers forward LeBron James finding yet another way to improve his overall game seems absurd, primarily because he’s already considered to be the best all-around player in the league. However, his recent success from beyond the 3-point line is helping to enhance the argument of those who claim that he may be the greatest player of all-time.

During the first five weeks of the 2016-17 season, James was connecting on 36.2 percent of his 3-pointers, a number that’s adequate but wouldn’t ordinarily draw a great deal of attention. However, in the month of December, he was able to hit 40.3 percent of his 3-point attempts during the 14 games in which he played. That puts his current percentage at 37.3 for the year.

The numbers have jumped even more when looking at his past seven games in 2016, with James connecting on 45.7 percent from beyond the arc. His 0-for-4 night against New Orleans on Monday night could be attributed to the combination of the onset of illness and other priorities taking precedence due to lineup issues.

“I have the ability to make threes,” James told reporters. “It doesn’t drive my game. Teams sag off me or tempt me to shoot, I’ve got to go up and knock them down. I’ve got to keep defenses at bay and keep them off balance throughout the whole game where they’re just not keying in on my drive or keying in on my postups. I’ve got to be able to knock down some outside shots too, so I work on that as well.”

Prior to the start of this year, James’ career shooting percentage from long-range stood at 33.9 percent. That career number has only inched up slightly this year to 34.1, though it’s difficult to make much headway in this area considering the fact that he’s tossed up more than 4,000 such shots during his stellar career.

This season, the four-time MVP has made teams pay for sagging off of him. When a defender is not within four feet of him, he’s hit 41.7 of his 3-pointers, a definite improvement from his 32.6 percentage in that category last year.

“It’s always a rhythm thing for me at times, so I’m just in a really good rhythm right now,” James said. “My body feels great. My stroke feels pretty dang good as well. I’ve just got to continue to put the work in.”

In addition, James has been especially deadly on his catch-and-shoot threes, hitting at a rate of 49.1 percent this season.

“When you catch the ball and you’ve got shots in rhythm, he has to shoot it,” Cleveland head coach Tyronn Lue said. “They work on his shooting every day. He can shoot the basketball. He makes 10, 11 in a row every time they’re doing their shooting. But he doesn’t like to come down, one pass sometimes, shot. But just take them in rhythm because he can shoot the basketball. So for me, it’s not a matter of can he make them, it’s a matter of him taking them.”

cleveland cavaliersfeaturedJ.R. Smithlebron jamesnews tickerTyronn Lue
← Previous Story A Detailed Look Inside a LeBron James Pass Called the ‘Punch, Snap, Hammer’
Next Story → Dwane Casey on LeBron James: ‘He’s So Ahead of the Game, It’s Not Even Funny’