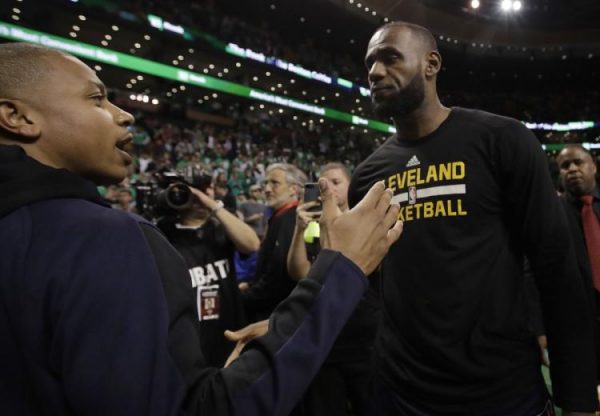 Though Cleveland Cavaliers point guard Isaiah Thomas isn’t expected to play in a regular season game until January because of a slow rehabilitation from a hip injury, his ability to connect with LeBron James for the remainder of the season will be closely scrutinized when he does return. How strong that connection becomes could help determine whether or not the Cavaliers can reach their fourth consecutive Finals and, more importantly, win their second NBA title in three years.

Joe Vardon of Cleveland.com noted that the two players are already working on creating the sort of chemistry that James and Kyrie Irving once had. Prior to the August deal that brought Thomas and others to the Cavs, James had never really established the sort of tight relationship with Thomas that he had appeared to have with Irving. Of course, the strength of that latter connection came into question this past summer when Irving specifically cited James’ presence on the Cavs as a reason for his trade request.

“Just mutual respect,” James said of Thomas. “Seeing him in All-Star games, always talked to him, always kind of got a good feel for him, always respected what he did. I watched him when he was at (the University of) Washington and when we competed against each other I always kind of like acknowledged him and his ability to play the game. But beyond that, I didn’t have much of a relationship with him but always kind of respected his game from afar.”

In recent days, James has used social media to try and establish a tighter relationship, citing Thomas as his “brother” and presenting images that show the dedication of Thomas toward rehabbing his injured hip.

“(The relationship is) growing everyday. It’s growing everyday,” James said. “Obviously seeing the ‘slow grind’ that he’s going through right now, which he calls it, it’s good to get out there and get some work with him as well. So, I can’t wait to get him out there.”

Thomas is continuing to keep his shooting touch when the Cavaliers aren’t practicing, though no set timetable is in place as to exactly when he’ll play his first game with the team. Thomas has spoken about beating the January projection, though given the high stakes the Cavs are playing for, the team will make sure that he’s officially recovered before he takes the court. After all, finding someone who can average 28.9 points per game, as Thomas did last year for the Boston Celtics, is pretty much impossible.