Iman Shumpert Speaks Out About Trade Rumors, Lack of Playing Time in Finals 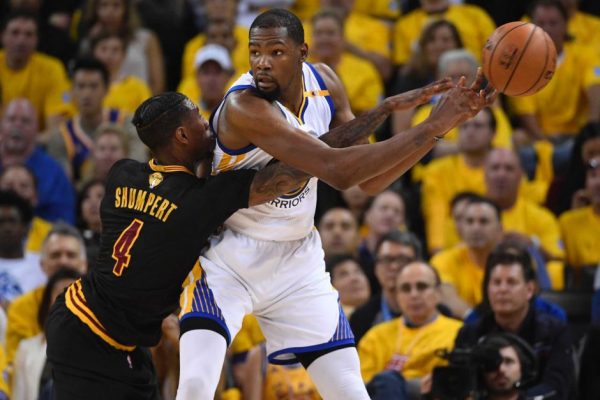 A tumultuous offseason for Cleveland Cavaliers shooting guard Iman Shumpert actually began during the NBA Finals, when his presence on the court virtually disappeared. Once the final horn sounded in Game 5 to end the season on June 12, Shumpert then spent the next three months as the subject of trade talk, causing him to recently ask for a meeting with Cavs head coach Tyronn Lue.

ESPN’s Dave McMenamin spoke with Shumpert about the meeting, which took place just prior to the team’s minicamp last month in Santa Barbara, California. The crux of the get-together stemmed not only on why Shumpert’s role was diminished during the Finals, but the lack of an exit interview, which would’ve allowed him to express himself on other issues.

“It was just that time for me to have a, just a grown-up conversation with him and just let him know, ‘Can we just sort of knock down the coach-player thing right now and can I just sort of talk to you personally about how I feel about how everything finished up last year?'” Shumpert said.

Lue indicated that, while he’s more than willing to meet with his players, he doesn’t really conduct such interviews once a season has ended. That fact surprised Shumpert.

“That was different for me,” Shumpert said. “I’m used to an exit interview, so, I felt like that’s the time you’re able to be honest and be outside of talking team.”

Shumpert was also frustrated by the perception that he had asked the Cavaliers for a trade, like his former teammate Kyrie Irving had in July.

“As far as coming back, with all the rumors that came out and nobody on the organization side coming out to say, like, ‘Iman didn’t say that,’ I let him know,” Shumpert said. “I felt like I was in the dark about everything and I was like, I don’t really know. All I can think about is where am I going to be next season? That was my concern. So I was just, like … finally able to be honest with him and let him know everything that was going on, and it was a one-on-one conversation and nobody got into … there was no he say, she say. It was directly from me, directly from him. So it was a good conversation.”

The meeting was able to at least partially set Shumpert’s mind at ease.

“He gave me the chance to be honest,” Shumpert said, “and he let me know that if at any time during the year I just want to come in the office and sit down with him and kick everybody out, he said if I just want to yell and be crazy, I can do that, so that definitely made me feel a lot better.”

The depth the Cavaliers have on their roster for the upcoming season gives Shumpert hope that Lue won’t have to rely so heavily on the starters to win games.

“It’s such an advantage for us, and I don’t think anybody will be running out of energy in the middle of the game anymore,” he said. “That was another concern we had, just gassing our main guys early on in the Finals, and this should be able to preserve bodies better with this team.”

Despite Shumpert’s concern over his role, Lue is fully expecting him to contribute this season.

“It’s always been, being that great defender, we need him to be guarding 1s, 2s and 3s,” Lue said when asked what his expectations are for Shumpert this season. “He’s taking his open shots. He’s going to be able to run more pick-and-roll this season. He’s been working on it all summer. We’ll just kind of give him free rein to do that and see how he feels until he gets comfortable. For the most part, his role hasn’t changed.”

Lue remarked about the talk and Shumpert’s new appearance, highlighted by a new haircut.

Shumpert could still be traded at some point this season, though right now, he’s part of the second unit and is teaming with newcomer Dwyane Wade in the backcourt.