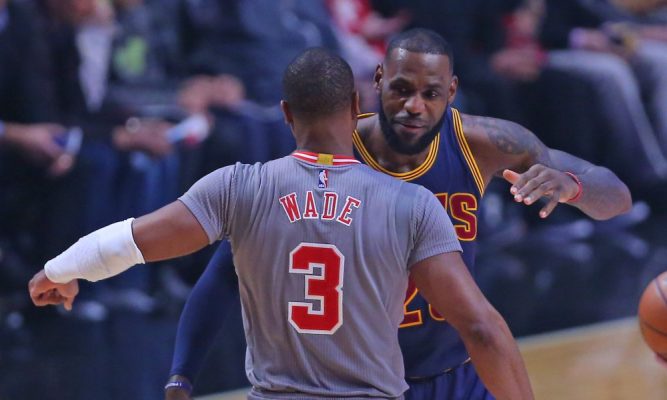 The possibility of a potential reunion between former teammates LeBron James and Dwyane Wade has gained traction now that Wade has been bought out of his Chicago Bulls contract. That fact didn’t escape the notice of James, who enthusiastically spoke of his desire to see it happen.

James spoke on Monday in a press conference during the Cleveland Cavaliers‘ media day about that prospect:

"I would love to have him." – @KingJames discusses Dwyane Wade’s buyout NOW on NBA TV. #NBAMediaDay pic.twitter.com/VQSVb1wluj

On Sunday, Wade agreed to give up $8 million of the $23.8 million he was scheduled to earn for the upcoming season. The veteran, who’s entering his 15th season in the NBA, indicated that he would be making his final decision on a team quickly. Two teams that the Cavaliers will be competing against are Wade’s old team, the Miami Heat, Oklahoma City Thunder, and San Antonio Spurs.

James and Wade were teammates with the Heat from 2010-14, reaching the NBA Finals during each season and capturing titles in both 2012 and 2013. James has spoken in the past about reuniting with Wade, who’s he’s been close friends with long before they connected professionally in Miami.