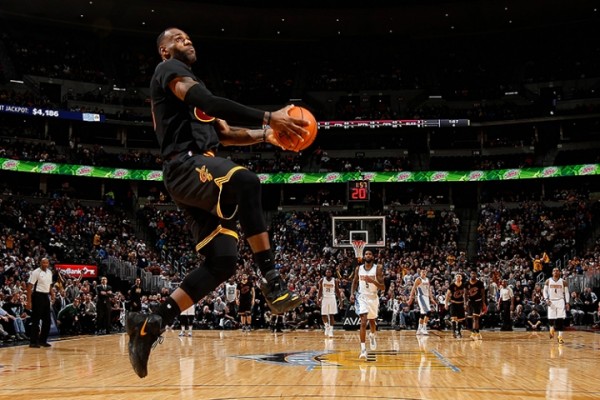 (Denver, CO) – Led by 34 points from LeBron James, the Cleveland Cavaliers closed out not only their four-game Western road trip, but the 2015 portion of their schedule as well, with a 93-87 win over the Denver Nuggets at Pepsi Center on Tuesday night.

James, who turns 31 tomorrow, also contributed five rebounds and a pair of assists to the effort. The victory improves Cleveland’s record on the year to 21-9, and also evens out the team’s four-game trip, which began with a pair of losses. Meanwhile, Denver drops to 12-20 on the season.

Cavs head coach David Blatt talked about the leadership of James after the game as he adds another year to his age:

“He knows his game and his game as well as anyone,” said Blatt. “He got into a good rhythm early, and we needed him to have a good game.”

Speaking about the psychology of playing the last of a four-games-in-five-nights stretch, James said the idea was to focus on the game:

“It was all mental, for everything,” said James. “We can rest tomorrow with a day off — that was the mindset we had going into the this game.”

Blatt also spoke about needing to build momentum with a strong performance:

“This wasn’t an easy trip,” said Blatt. “We felt we needed to finish the trip strong and get momentum to enter the new year, and the guys responded well.”

Offering strong defense throughout the matchup, the Cavaliers essentially took control of the contest during the second quarter as they connected on 57 percent of their shots during the period. They were paced primarily by the trio of James, Kevin Love and Iman Shumpert, who combined for 21 of the 27 points over the course of the quarter. That helped turn a slim 30-27 advantage with 8:27 left before intermission into a 51-36 cushion with 1:26 left after a Love dunk.

From there, the Cavaliers never allowed the margin to get below eight points until the final seconds, and over the course of the game, forced 18 turnovers by Denver. With just under two minutes left in the game, the Nuggets had the opportunity to slice their deficit to as little as six, but a steal and tomahawk dunk by James put a cap on any comeback effort by Denver.

Blatt was happy with the defensive effort put forth:

“Tonight, we locked in, because they (Denver) have really been scoring the last few games, and we needed it (defense) to win the game.”

Cleveland was playing without Kyrie Irving, who was held out by the team to avoid having to play on consecutive nights. However, Shumpert and J.R. Smith helped make up for Irving’s absence in the scoring column by combining for 27 points. Love narrowly missed a double-double with eight points and 14 rebounds, primarily due to a rough shooting night that saw him make just 4-of-16 from the field, an issue that’s likely related to a thumb injury he’s currently nursing.

Denver was hitting just under 35 percent of their three-point shots prior to Tuesday night’s clash, but Cleveland slashed that amount by almost half, limiting the Nuggets to just 5-of-24 from long range. However, the Cavs also struggled from beyond the three-point line, hitting just 4-of-22 shots from that area, and also missed a chance to ice the game earlier in the fourth quarter by missing nine free throws.

James spoke of what the team needs to do as the calendar turns to 2016:

The Cavaliers begin 2016 with a home matchup on Saturday evening against the Orlando Magic, with tipoff set for just after 7:30 p.m.