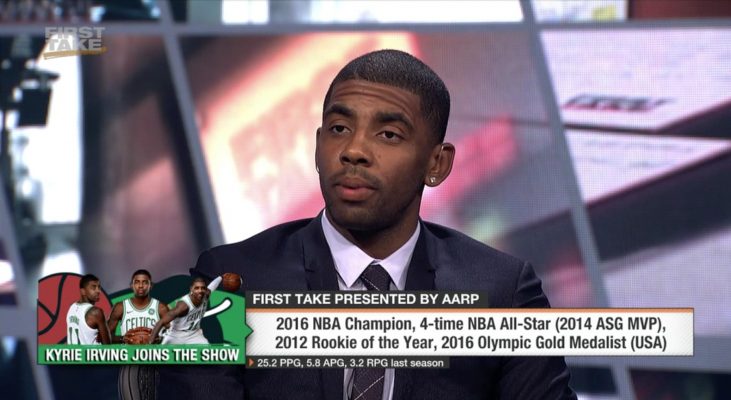 Kyrie Irving made news on Monday morning when he joined ESPN’s “First Take,” and spoke candidly about the media storm that followed his trade request from the Cleveland Cavaliers.

In the interview, co-host Stephen A. Smith asked Irving what he thought about James’ reported reaction to hearing about Irving’s trade request from the Cavs.

“I reported that LeBron (James) was so ticked off because his name…not because you made a decision for your own future, but because his name was in the mix,” Smith said. “Did you hear about that at all, what was your reaction when you heard about that?”

Irving responded by not so subtly implicating James in the leak of his trade request.

“Well I felt like the timing was impeccable, if you ask me,” he said. “I think that, um, how ironic it was that I was on my China trip, and how my trade request all of a sudden just came out publicly, and it was hurtful because I knew how professional I had kept it throughout the whole entire process.”

Irving continued by blaming outside forces for the mayhem his trade request subsequently created.

“I knew that it was going to be madness and it turned out to be like that. And when you’re living in a reality base, and I’m a very awake individual, and you have all these exterior forces trying to change or skew everyone else’s opinion, and I’m not able to say anything, and I’m sitting back and being very, very patient. It became something that I didn’t understand because of the amount of moments that we had together as a team,” he said.

Smith then asked Irving what he meant by saying the experience was hurtful.

“It was hurtful to see that a lot of the reports and the things that were happening, there was probably…it was minimal truth to it,” he said. “And a lot of the character issues that some individuals tried to tirade about me, and, it’s not that it matters, it’s just that…the fact…what is the intent behind it? Is that what this is turned out to be? To turn someone’s decision into a full on, ‘Let me get everything out.'”

There is still much that we do not know in terms of what took place between James and Irving before, during, and after Irving’s trade request. It’s apparent through his words, however, that Irving places some of the blame on James when it comes to the negative press he has received since his request.