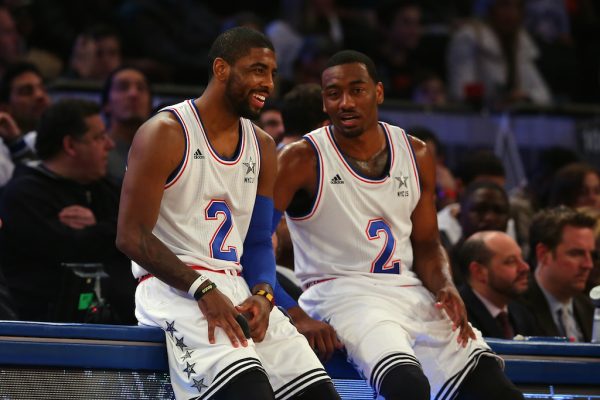 Ever since Cleveland Cavaliers point guard Kyrie Irving‘s trade request became public, many opinions have been offered by media, fans and fellow NBA players. Among the most recent in the latter category is Washington Wizards point guard John Wall, who spoke about his reaction to the request and the possible reasoning behind Irving’s decision.

Chase Hughes of CSN Mid-Atlantic relayed comments made by Wall on Friday, with the point guard indicating that if the roles were reversed, his inclination would be to stay with his team.

“That was crazy to me. I didn’t know that was happening at all. Well, too bad,” Wall said. “It’s kinda tough. If I had been to three straight [NBA] Finals, I’d want to stay but you never know what type of relationship or what type of details they have going on the backside. Nobody knows what’s going on behind closed doors. He’s one of those guys who wants to be the main guy.”

Regarding Irving’s request being based on his eagerness to get away from being overshadowed by LeBron James, Wall spoke about the difficulty in working together as a team when every player seemingly wants to be the big name.

“It’s a different situation when you’re playing with a guy like LeBron James who is so dominant. Everyone is always going to be the second guy to him,” Wall said. “It’s kind of like what I tell all the young guys when they first come into the league. It’s kind of tough to get the young guys to play as one on the floor because everybody is trying to build their name up and start their own foundation. It’s kind of tough when you’re always in the shadow of somebody else. That’s something he probably got tired of.”

The Wizards took a big step forward this past season by reaching Game 7 of the Eastern Conference semifinals against the Boston Celtics. Despite the chance that Irving’s departure could provide Washington with a better chance to dethrone the Cavaliers, he was reluctant to look that far in advance.

Wall recently signed a massive four-year extension with the Wizards that’s set to pay him $170 million when the deal kicks in beginning with the 2019-20 season. Coincidentally, the first announcement of that deal two weeks ago came on the same day that Irving’s trade request was made public.