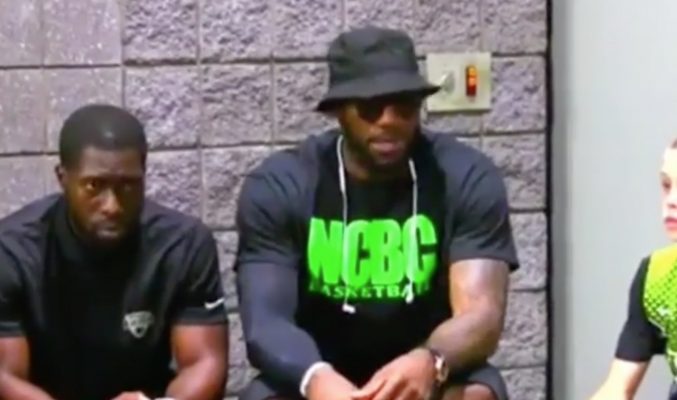 LeBron James has been spending much of his spare time in Las Vegas attending his 12-year-old son LeBron James Jr.’s AAU games as his team competes in the Adidas Uprising event. While James Jr. and his teammates still have a long way to go as players, James was recorded in a recent video treating the youngsters like his own team as he took on the role of postgame motivational speaker.

James, donning one of the team’s North Coast Blue Chips T-shirts, began sharing wisdom that he likely gained after leaving the Cleveland Cavaliers for the Miami Heat in 2010, a move that took him from being a fan favorite across the NBA to one of the most hated players in the league.

“Ya’ll gotta understand that when we come to a tournament, when ya’ll come to a tournament everybody wants to see ya’ll lose,” James said. “Every time we do something good it’s just us clapping for each other. Anytime another team that we go against, the whole god damned crowed is going crazy, they want to see us lose. They want to see us lose. So we gotta approach it like, every time we go out to play we gotta play for one another and nobody else.”

See James motivate the future of the sport in his own words below.

James has certainly seen both sides (love and hate) from fans throughout his storied career. As James Jr. and his teammates continue to progress as players in the sport, they would be wise to soak up every lesson James shares along the way.